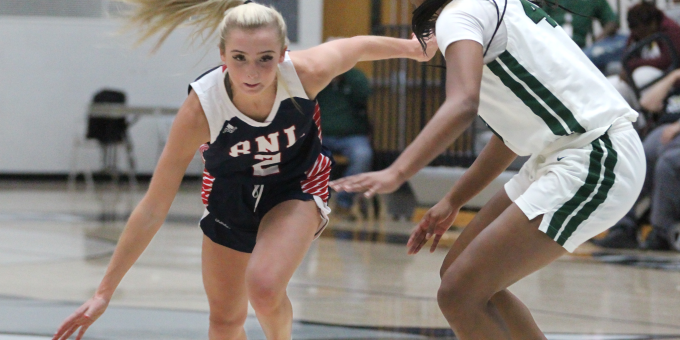 BEDFORD – Just a few years ago, a young first-year coach attended an Indiana Basketball Coaches Association clinic, absorbing all the information he could while listening to some of the state’s best discuss the game. One of the guest speakers that year? Bedford North Lawrence’s Jeff Allen.

Did Allen divulge too much? Did Gibson Southern’s Kyle Brasher learn valuable insight during that speech? Their teams will reveal just how many program secrets – if any – were disclosed when they clash for the first time on Friday night.

BNL, still stinging from its first loss and the subsequent drop to No.5 in the Class 4A poll, will look to rebound when it battles Class 3A No.8 Gibson Southern (4-1) in the Evansville North Showcase.

The Stars (6-1) are in bounce-back mode after a rare thumping. The 15-point loss to current No.2 Zionsville was the first double-digit setback since the 2020 semistate (Lawrence North) and the worst loss to an Indiana opponent since 2018 (North Central). Ouch, that was unusual, unaccustomed ache.

“Our kids are looking to bounce back,” Allen said. “That loss stung pretty good. I think we’ll be focused and play hard.” The cure for that pain? “Just get back to work,” Allen added. “We’ve had a really good week of practice. I think they’ve got a chip on their shoulder, we feel we didn’t put our best foot forward. Against a good opponent, that’s not a good thing. I think we’re ready to play.”

Looking back on the loss, the most obvious point of emphasis will be offense. The Stars, who were averaging 68 points per game before the sudden slippage, shot a miserable 30 percent. Plus they got outrebounded 40-24.

“We didn’t do a bad job defensively, but the offensive part we struggled,” Allen said. “You won’t beat a team of that caliber scoring 41 points. We have to be more aggressive and make shots when we play somebody that good. Sometimes it’s kids making plays, and we didn’t make plays.”

Brasher might wish BNL was headed into this weekend with momentum rather than anger. The Titans aren’t at full strength, although they haven’t missed a beat during their hot start.

Gibson Southern sophomore star Gabby Spink, who already holds recruiting offers from Evansville, Bradley and two other programs, has missed the first section of the season with a stress fracture. She’s scheduled to return in December. Spink, a 5-9 guard, averaged 13.9 points last year.

“Gabby is obviously a huge part of what we do,” Brasher said. “While she’s out, we’re not using that as an excuse to play poorly or have expectations that we will not play our best and expect to win. The girls have taken that mindset. When we get her back, it will add a new piece to the team we haven’t had yet and make us a deeper team.”

In Spink’s absence, the Titans have gotten increased production from senior Alexis Tucker (19.0 points, 8.2 rebounds), junior Chloey Graham (15.8 points, 5.6 boards) and senior Ava Weisheit (9.8 points). Gibson, with its only loss to 2A No.1 Forest Park, ranks third in the state in scoring at 66.6 per game.

“Alexis has been a double-double machine,” Brasher said. “She’s gotten more athletic, developed a perimeter game, and she’s gotten a lot of second-chance points for us.”

“They’re playing well,” Allen said. “They’re very aggressive. They really go after their opponent. They look to shoot the ball from the 3-line, they have some nice players. We’ll have to be solid on the defensive end. They really go at the glass hard, even though they’re not much bigger than us. They have kids who are capable scorers.”

BNL will counter with the All-Star duo of Chloe Spreen (21.6 pts, 6.0 rebs) and Karsyn Norman (16.9, 4.0 assists), although it’s the supporting cast that got Brasher’s attention while compiling his scouting report.

“They’re tough, hard-nosed, and they maximize every ounce of talent they have,” Brasher said. “You hear a lot about Spreen and Norman, but some of their secondary pieces have really impressed me. I really like (Mallory) Pride’s game. They’re consistent in their offense, and you have to be on your game. If you don’t battle every possession, they’ll make you pay for it.”

When: Friday, 6 p.m. at Evansville North

Last meeting: This the first meeting between the schools.

Game notes: Evansville Memorial will face prep school La Lumiere (with former Noblesville star Ashlynn Shade) in the second game of the night at Evansville North. Gibson Southern ranks third in the state in scoring at 66.6 points per game. BNL is 10th in scoring at 64.1. BNL hasn’t lost back-to-back games since the 2019-20 season.