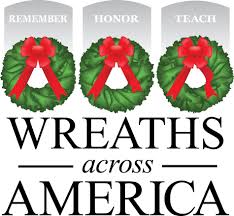 COLUMBIA FALLS, ME —  The mission of Wreaths Across America (WAA) is to Remember the fallen, Honor those that serve and their families, and Teach the next generation the value of freedom. Although the organization is best known for laying veterans’ wreaths on headstones of our fallen each December on Wreaths Across America Day (December 17th this year), the WAA mission is year-round and supported by the efforts of thousands of dedicated local volunteers throughout the country.

Each year, WAA recognizes some truly outstanding individuals with its national Remember, Honor, Teach and Learn awards. Each award recipient is chosen from recommendations by our volunteer base and staff, culminating in an extensive review process by the WAA Executive Leadership Team.

Other awards include the Jim Prout Spirit of Giving Award which is chosen by the WAA Logistics Team based on recommendations from professional truck drivers, volunteers, and staff and the Founder’s Award which is an honor bestowed by the organization’s Founder, Morrill Worcester, for appreciation of outstanding contributions in the effort to honor our nation’s veterans. These two additional awards will be presented later this year.

And the winners are:

REMEMBER Award: Given to an individual or group who REMEMBERS the fallen and their sacrifice in a way that goes above and beyond. This year’s recipient is Richard “Richie” Poirier of Maine.

Corporal (ret) Poirier of Bravo Company 2nd 34th Mechanical Infantry Division of the United States Army served his country between 1983 and 1985. Following the events of 9/11, Poirier moved into a role of community service, helping to raise funds for people in need, coordinating blood drives, and serving as a local Fire chief in Maine. In 2015, his most satisfying community project was building a display case for a piece of steel that originally came from the twin towers in New York for the Wreaths Across America Museum. Recently, Poirier helped complete renovation work on the newly completed Gold Star Family History and Hospitality House located next door to Wreaths Across America’s headquarters. This 1800s home features period rooms that honor many eras of American service, bravery, and sacrifice.

HONOR Award: Given annually to an individual or group who HONORS those who serve and their families in a way that supports the Wreaths Across America mission. This year’s recipient is Cyndi Valencia of Illinois.

As a proud descendent of Revolutionary War patriots, Cyndi has made it her personal mission to Honor our present and past veterans. For over two decades, she has been volunteering for numerous causes including Operation Care package, the Abraham Lincoln National Cemetery Memorial Squad and support committee, Grateful Nation Remembers, Daughters of the American Revolution, Illinois Children of the American Revolution, Honor Flight Chicago, and many others through the years.

TEACH Award: Given annually to an individual or group who has made a large contribution to TEACHING the next generation to Remember and Honor those who serve in our nation’s military. This year’s recipient is Cindy Tatum of Tennessee.

Cindy Tatum became a Gold Star Mother on December 24, 2007, when her son, Cpl. Daniel Lee Tatum, USMC, who had served two deployments in Iraq, was killed outside of Camp Pendleton in an automobile/train collision. Approximately two years later, Cindy knew she had to “do” something to help keep the memory of her son’s service alive. In 2009, Cindy joined American Gold Star Mothers in her home state of TN. Cindy served on the National Executive Board of AGSM from 2013-2021 and served as the 2020-21 National President. She retired as an educator in May 2020, after spending 26 years as a Government and Economics teacher at Milan High School.

Cindy was delighted when she was approached by Wreaths Across America and asked to help develop a curriculum for the Teach component of the Mission. The programs she developed for teachers in their classrooms, from Kindergarten through Senior year of high school, can be found at www.wreathsacrossamerica.org/teach. Cindy lives in Milan, TN, with her husband of 39 years Andy, and her service dog Linus. They have two adult children and four wonderful grandchildren.

LEARN Award: Given semi-annually to a young individual who has LEARNED, and understands, the Wreaths Across America mission and incorporates it into their young life. This year’s recipient is 11-year-old Trevor Geer of Maryland.

Despite the challenges associated with concerns over a pandemic, for the past few years, Trevor Geer found a way to overcome these obstacles and still manage to honor over 500 fallen service members buried in four cities along the Chesapeake Bay. He attended his first wreath-laying ceremony at the Eastern Shore Veterans Cemetery at the age of six, Trevor remembers being upset that some headstones did not have a veteran’s wreath to honor the interred. He said, “The people who fought for us is what made the country what it is today, and they deserve a wreath.”

This year, National Wreaths Across America Day will be held on Saturday, Dec. 17, 2022. It is a free event, open to all people. Click here to find a local participating cemetery near you to support go to and type in your town and/or state. For more information or to find a participating cemetery near you, please visit www.wreathsacrossamerica.org.

About Wreaths Across America

Wreaths Across America is a 501(c)(3) nonprofit organization founded to continue and expand the annual wreath-laying ceremony at Arlington National Cemetery begun by Maine businessman Morrill Worcester in 1992. The organization’s mission – Remember, Honor, Teach – is carried out in part each year by coordinating wreath-laying ceremonies in December at Arlington, as well as thousands of veterans’ cemeteries and other locations in all 50 states and beyond.

For more information or to sponsor a wreath please visit www.wreathsacrossamerica.org.