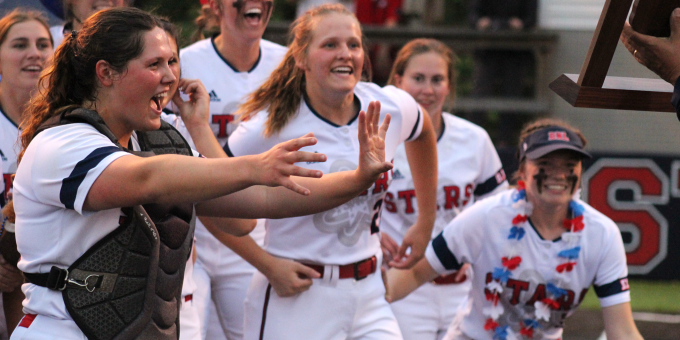 BEDFORD – County color codes, limited capacity, masks. Rules and regulations. Schedule juggling. The headaches of COVID continued to throb during the 2020-21 sports season, causing disruptions of “normal” and adjustments on the fly. Somehow, through all the turmoil, Bedford North Lawrence completed an unprecedented journey.

Whether by fortune or fortitude, BNL forged ahead, with minimal disturbance, with the entire calendar. The Stars added to the championship trophy collection, individual stars were rewarded for their patience and persistence. Their light pierced what could have been dark times.

Here is the list of the year’s top moments, each memorable or dramatic, each unforgettable during a year that will definitely not be unappreciated for the perseverance demanded:

9. Boys basketball season paused by COVID: BNL was forced to the sideline, like so many programs, in December for a week when a member of the boys basketball program suffered virus symptoms. The game with Madison was cancelled just minutes prior to the start of the junior varsity contest, and the Stars were idle for the next week.

8. Allen named All-Star coach for second time: Allen was named the head coach of the Indiana girls All-Stars for 2020, but those annual games with Kentucky were cancelled because of the ongoing pandemic. All-Star officials selected Allen to guide the All-Stars in 2021, and he led the Hoosiers to a split of home-and-home series. Allen, who owns an impressive 155-34 record in seven years with the Stars, was the third BNL coach to be chosen for the All-Star spot.

7. Stone named South All-Star: BNL senior Sarah Stone, a feared slugger headed to the University of Kentucky, was named to the South All-Stars for the summer North-South softball doubleheader. Stone powered the Stars to a remarkable 28-5 campaign while earning All-State honors, hitting .553 with 17 home runs and 49 RBIs. She had a double as the South, led by BNL’s Brad Gilbert, defeated the North 4-3 in 9 innings.

6. Football misses postseason: BNL football, scheduled to face New Albany in the first round of the tournament, was forced to withdraw from the Class 5A sectional when members of the coaching staff were diagnosed with COVID following the end of the regular season. The Stars finished the season with a 2-7 record.

5. Weber resigns as football coach: Steve Weber, who guided the program for eight seasons, stepped down as head coach. Weber went 33-48 in his eight years. His departure opened the door for his former player and friend, defensive coordinator Derrick Barker, to be named as the new head coach.

4. Cosner’s shot stuns New Albany: Ben Cosner, with a defender flying at him, swished a 15-footer at the buzzer as the Stars stunned New Albany 49-48 in the sectional semifinal at Seymour. Cosner’s heroic jumper, set up by Colten Leach’s drive through traffic as the Bulldogs attacked him, capped a remarkable comeback. BNL trailed by 14 in the third quarter, by 11 starting the final period, and clawed back to record one of the classic victories in program history. The Stars fell to Jeffersonville in the sectional final and finished with a 14-11 record.

2. McKnight named Indiana All-Star: BNL senior Chloe McKnight, already a member of elite company as one of the top scorers in program history, was named to the 2021 Indiana All-Star squad, becoming the 10th player in BNL history to wear the prestigious jersey and represent the state in the series with Kentucky.

McKnight, a senior on her way to Saint Francis, averaged 13.7 points, 4.6 rebounds and 2.6 steals per game. She also finished fifth on the school’s career scoring list. She scored six points in the two games against Kentucky and followed in the footsteps of BNL greats – including two Miss Basketballs – as a member of the All-Stars.

1 Softball wins regional title: Sarah Stone’s gigantic grand slam, a 270-foot home run to center field, in the bottom of the fifth inning powered the Stars to a 5-2 victory over Gibson Southern in the Class 4A regional at BNL. The regional championship was the second in program history. BNL suffered a 2-1 loss to Mt. Vernon (Fortville) in the semistate at Center Grove.