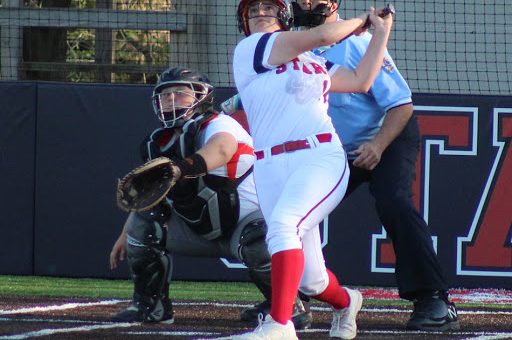 INDIANAPOLIS – Her first love was tap dancing, until her father discovered Sarah Stone’s true talent while pitching her balls in the back yard and watching the 6-year old smack them. “And I never looked back,” Stone summarized. She has danced her way to legendary status.

Stone, Bedford North Lawrence’s superstar catcher and South All-Star, teamed with head coach Brad Gilbert one last time, cracking a double during the annual North-South All-Star game at Decatur Central on Saturday. The scheduled doubleheader was reduced to a single nine-inning game because of the multiple storms that blew threw the region, and the South rallied late for a 4-3 victory.

Nobody deserved All-Star status more. Stone, a University of Kentucky recruit, was a catalyst on the diamond, hitting .540 with 17 home runs and 49 RBIs while powering BNL to a 28-5 record and a regional championship this season. She was a true leader off the field, a star who played with extreme passion and a willingness to share the limelight with everyone on the roster.

“I’ve built friendships and tried my best to be the best teammate I could be, the best player I could be for my teammates,” Stone said as her BNL career closed. ““I try to be friends with everyone I can. It’s better to have friends than enemies, it’s better to know everyone instead of being in a room of people you don’t know, and you don’t know if you can talk to them.”

Stone has never met a stranger. She chatted with umpires, she fired up fans while prancing in front of the dugout and waving a bat in powerful circles, she treated every player on her team as the most important member of the squad. There is no star arrogance. Her personality shines through.

“I made sure everyone was welcome,” Stone said. “I would rather have the 20 other girls as my best friends, than have any of them see me as arrogant or not humble. I’m humbled every single day. There’s never been a time I haven’t done something during a game and been like ‘Oh, wow, I wish I could take that one back.’ Maybe it was a swing or a throw. Maybe I wasn’t in the dugout going crazy like I typically am.

“I look back on those things and wish I would have done more, given my encouragement and excitement a little more to other players. Or talked to a specific player, if they weren’t doing well, to encourage them in their moment of their failed success.”

Stone, who made her reputation during AAU tournaments, committed to Kentucky on Jan. 14 of her freshman year, then proceeded to live up to that status. During her three-season career (with 2020 wiped out by the cancellation of spring sports during the virus pandemic), she hit .537 with 34 home runs and 125 RBIs, collecting 130 hits in only 82 games. She set a standard of excellence.

“I’m not sure there are words to describe it,” BNL coach Brad Gilbert said. “It’s so exciting. To say we have one of the best softball players in Indiana, it’s unbelievable. It gives players something to look up to, a goal to shoot for.”

Her highlights are many, whether it was throwing out base stealers from her knees or blasting mega-bombs (including the 270-foot grand slam in the regional). But it was her unassuming character, her approachable nature, her absolute love of the game, that made her special.

“There were a lot of times, I would look over, and she would be talking to someone around the batting tee, talking about her swing,” Gilbert said. “She treated every player like they were the most important player on the team. It didn’t matter how much playing time they were getting. That just shows how awesome of a person she is. She wants everyone to enjoy softball as much as she does.”

Stone was talented enough to compete in other sports, but she chose softball as a 12-year old and started her journey on travel teams, quickly getting noticed by college coaches. She has earned the rewards of her labor.

“When I think of this, I think of someone who has worked very hard the past four years,” Stone said. “I’ve always been encouraged to go make memories with people that want to make memories with you. So being friendly, talking to umpires, learning their names – and hopefully getting some calls in the process – it’s been an experience.”

Stone was the runner-up in the Miss Softball voting to Lake Central’s Peyton Peplowski. The other candidates were Lakeland’s Keirsten Roose, Decatur Central’s Dylann Cravens and New Palestine’s Sam Booe. The South scored three runs in the ninth inning, with Genesis Munoz ripping a key two-run single, to rally past the North.