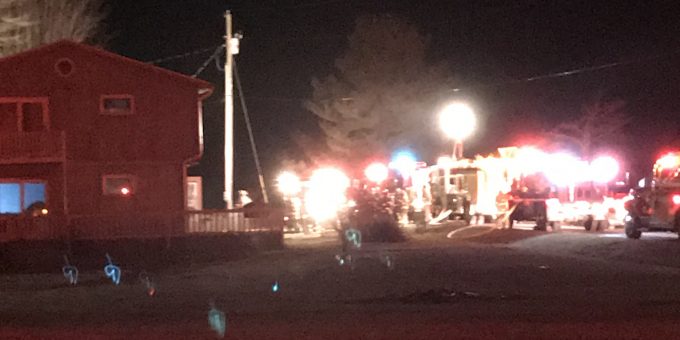 (BEDFORD) – A refrigerator is being blamed for starting a fire at 40 Davis Drive on Tuesday night. The fire was reported around 8 p.m. at a home near Kenray Lake.

Residents John Roll and Trisha Monnier, along with their three children, were all at home when the fire started.

Firefighters from Shawswick, Marion Township, and Pleasant Run Fire Departments responded to the blaze with eleven engines and 19 firefighters who were able to quickly get the blaze under control.

Shawswick Lt. Kyle Brown and Assistant Chief Adler Ramsay were able to get inside the home, locate the fire and get it knocked down quickly.

“There was smoke damage throughout the home; however, we were able to confine the fire and prevent further damage,” said Lt. Brown.

“My fiance was cooking and using a deep fryer when the blaze broke out,” stated Trisha Monnier. “I am just glad our children are fine and no one was hurt.”

The family does have insurance. The family was not able to stay at the home Tuesday night. The American Red Cross responded to the scene and provided the family with a place to stay for the night.

“We will probably be needing some help with clothing, but at this point, I think that is all we are going to need at this time,” Trisha added.

Along with the three fire departments, IU Health, Tabernacle of Praise Emergency Services Unit and the American Red Cross responded to the incident.

This will make three residential fires Shawswick Fire Department has responded to in a week. Everyone is reminded to check their smoke detectors and have an escape plan in the event of a fire.