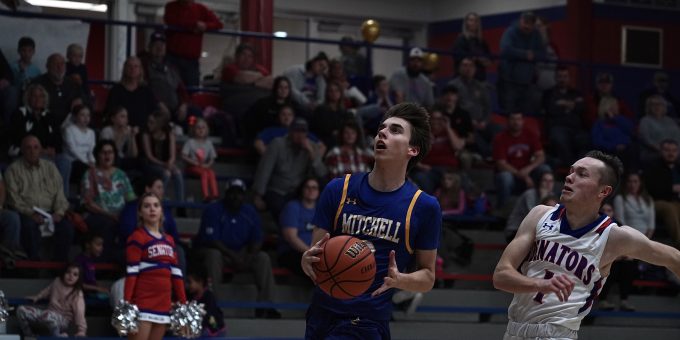 People have long said that basketball is a game of runs and that was almost never more true than Friday night, when Mitchell High School made the trip to West Washington for a Patoka Lake Athletic Conference matchup between the schools.

A hot streak from the Senators put them up by 25 at one point near the end of the first half, then the Bluejackets went on a run themselves, controlling the second half and bringing it within a one possession game with under 10 seconds left to play, before ultimately losing 58-57.

Both teams were largely even in the first quarter, trading small leads back and forth until West Washington was able to score six unanswered points near the end of the quarter, which put them up by 5 to end the first, 14-9.

Then, the Senators caught fire in the second quarter.

Kenton Washington was the first to score for West Washington in the period, converting on a layup attempt he was fouled on and sinking the free-throw.

Mitchell’s Gavin Robinson was the next to score, laying the ball in for two shortly after. Senator Jaxson Cambron countered back with a three, what was the first of many for himself and West Washington in the second.

With 6:48 remaining to play in the quarter, Robinson was able to score another bucket for the Bluejackets, but Cambron knocked down another three on the other end just 13 seconds later.

It was then Lane Hoefler’s turn to knock some threes down for the Senators, knocking his first down with 4:44 remaining. Mitchell’s Dawson Irwin scored next on the other end, with his two points breaking an 8-0 run. Hoefler then knocked down back-to-back threes in the span of 23 seconds to extend his team’s lead to 19 by that point.

The Bluejackets would find a few more baskets in the final three minutes of the quarter from Robinson and Ben Seitzinger, but that was mute after eight more West Washington points to close the quarter, including both Hoefler and Cambron draining another three.

When all was said and done, the Senators had shot 7/9 from downtown in the second, leading them to outscore Mitchell 28-10.

Bluejackets’ Head Coach Jackson Ryan said his team’s made key errors defensively , which contributed to the snowballing second quarter from West Washington and didn’t move the ball on offensive as well as they could have, leading to their comparatively low scoring output.

“Just a lot of mental errors. Again, keeping (Cambron) out of the paint, off his right hand, not letting (Hoefler) catch and shoot threes. That’s their bread and butter. And they do a great job, that’s what happened. In the end it snowballed on us and offensively we were a little stagnant, a little selfish, especially compared to the second half, so it just can’t happen,” said Ryan.

“I think I need to, I say take a timeout earlier, but I’m glad we had it at the end so we could extend the game. But it’s a catch-22, coulda, shoulda, woulda with everything, and I’m sure the kids are probably saying that as well. But we have to be consistent and that starts in practice,” he added.

A different Mitchell team emerged from the locker room to start the second half, rattling off an 11-2 run to start the third quarter, with baskets from Seitzinger, Bryson Shoults and Austin Mosier. The Senators were only able to score four points in the quarter on baskets from Hoefler and Ian Rosenbaum, with the Bluejackets netting 15.

The fourth was more of the same for Mitchell, starting things off with an and-one from Kale England, which reduced the West Washington lead to single digits for the first time since early in the second quarter.

England connected on a jumper to reduce the lead to seven, before a quick five points from Hoefler once again put the Senators up by double digits with 5:06 remaining. Mosier and Cambron traded threes before baskets from England and Shoults reduced the lead down to eight with 2:46 left to play.

Kenton Chase scored two for the Senators, but five points thanks for another three from Mosier and two free-throws from Brendan Tolliver put the Bluejackets within five with 1:34 remaining.

Mitchell began to intentionally foul at this point to stop the clock, sending West Washington to the line twice for free-throw attempts. Both times, the Senators’ player missed the first to give possession back to the Bluejackets. Shoults was then sent to the line with 35 seconds remaining, where he sank both of his free-throw attempts, making it just a three point game, 56-53.

Another intentional foul sent Cambron to the line with 19.7 seconds left. At this point, they were deep enough into the bonus that any foul was an automatic two shots from the line. Cambron missed both attempts, giving the Bluejackets the ball back with just under 20 seconds to bring the ball up the floor and potentially tie the game.

Unable to get a shot off, Ryan called a time out with 9.6 seconds remaining, drawing up a play for his team. Out of the timeout, Mosier looked for a three, but was unable to find a clean look, opting to instead drive to the basket for a layup, which made it a one point game with three seconds on the clock. The Senators then held the ball, not inbounding and wisely letting the clock drain to secure their victory.

After the game, Ryan said he drew the final play up with the idea of going for the tie, but West Washington’s defense did not give them the look they’d hoped for, forcing them to instead take the two.

“The play was definitely for three, you know credit to them for taking that away. Bottom line, you’ve gotta go do something and we got to the rim. I thought the last two minutes, we’ve not had very many late game situations where we’re coming from behind, so very proud of how we executed. Again, coulda shoulda, woulda, we’d love to have a time out there. If we could have got to the ball and tipped the ball in the bleachers to stop the clock that would have been good,” he said.

“Bottom line, you have to get something to the rim if they’re taking away the three point line and credit to them for taking that away and we made a play, unfortunately just came up a bit short.”

After entering halftime down 23, Mitchell outscored the Senators in the second half by 22 points, 38-16. The difference, according to Ryan, was the team’s defense effort, as well as their balanced scoring attack.

“We were balanced. Moser with 13, Seitzinger with 13, England with nine, Robinson with eight. So, that’s when we’re playing our best basketball is when we’re balanced and attacking. We’re tough to be with tough, tough to scout,” he continued.

In the end, the slow first half from the Bluejackets was too much for them to overcome, despite a strong showing to close the game. Ryan noted the similarities between the team’s loss on Friday and their loss a few weeks ago to South-Central, another game where the team made a run in the second half, but came up just a few points short in a loss.

“I mean ultimately you can’t dig yourself that big of a hole, especially against a conference opponent on the road. That’s the bottom line. We’ve just got to execute better in the first half. We let the Kenton Chase attack and get downhill and either score or kick out to (Hoefler) or (Cambron) and they were knocking down shots and made us pay for it. That can’t happen,” Ryan said.

“But that’s on one hand. On the other hand, I couldn’t be more proud of how we played the second half. I feel like a broken record here, back to South Central. If I could take one half here and one half there and bottle it up and put it together for 32 minutes, we’d be a really good ballclub. But, we just have to be consistent and that starts in practice,” he added.

This loss brings Mitchell’s record on the season to 3-13, with a 1-4 record in PLAC play. Their next game will come on Jan. 27, when they face another PLAC opponent at The Hive, Perry Central (4-11).