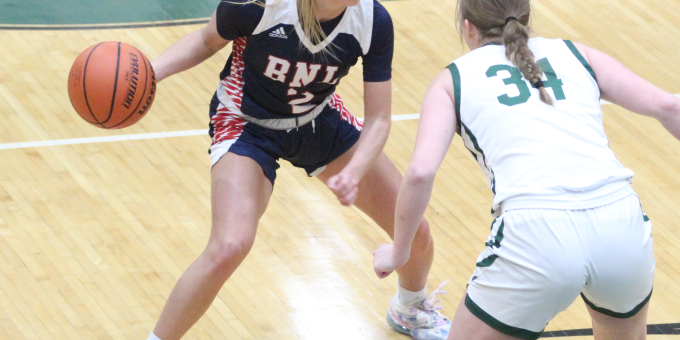 BEDFORD – During the classic Star Trek episode “The Trouble with Tribbles,” the crew of the Enterprise almost got overwhelmed by soft, furry creatures. The next episode of Bedford North Lawrence’s trek should be entitled “Trouble with Trabel.”

Not that there’s anything soft or furry about Josie Trabel’s game. East Central’s senior star, headed for Wofford, is hard to guard, hard to contain, hard to handle. At 6-0, she’s able to handle the ball in the backcourt or post with power in the paint. The Stars will have to set phasers to stun.

No.7 BNL (18-3) will complete its regular-season road tests with a trouble-filled visit to East Central (14-9) on Saturday afternoon. The Stars, with their height disadvantage, have had to tangle with some of the best big players in the state, and Trabel will add her name to that list. She’s been on BNL’s radar screen for a long time, having battled the Stars in five previous meetings.

This season, Trabel is averaging 21.1 points, 10.0 rebounds, and 3.3 assists. She’s hit 30 treys, blocked 33 shots – done everything except fill the water bottles for the Trojans. She’s likely destined to be an Indiana All-Star.

“She’s a really versatile player,” BNL coach Jeff Allen said. “She can step out to the 3-line, she can handle the ball, and she can post it. She has the size and athletic ability. She’s a tough matchup for anybody, especially us. We’ve really tried to throw a lot of stuff at her defensively, but she’s hard to handle. We’ll do the best we can.”

The trouble for the Trojans has been finding other reliable options. Senior guard Laney Baker has added 13.3 points. East Central has been streaky (winning four straight, losing four in a row, winning six more).

“Our keys are really about finding consistency,” EC coach Kevin Moore said. “That’s what we’ve lacked thus far against the really good teams we’ve played. Josie has been a model of consistency in her career and this season, but finding that second and third scorer has been the issue for us.

“We have not shot the ball well as a whole group, which is puzzling considering how well we shoot it in practice. It will be key that Laney finds ways to score the ball and having someone step up and hitting shots. We feel like we have kids that can do that, just waiting on them to show it under the lights.”

“I would rank them as the top Indiana duo we’ve played in last 10-plus years because they do it at both ends, consistently better than any others that come to mind,” Moore said. “Slowing them down is obviously the key and easier said than done, because both have expanded their skill set. We used to be able to play off Chloe, but she’s really put the time in to be a high-percentage 3-point shooter, to go with her off-the-bounce ability and scoring in the post game.

“With Norman, her shiftiness and explosiveness always have you on your heals as a defender, so we have to maintain proper spacing to keep her from getting downhill – but not enough space for her to hit her pull-up jumper than she’s so good at.”

Spreen had 15 points and Norman added 14 during last year’s clash with East Central. BNL won that one 47-40 in the semifinal of the Pete Pritchett Classic at BNL, with Trabel posting 20 points and 9 rebounds. The Stars now lead the series 8-0, but some of those previous games have been classics (51-50 in the 2021 regional semifinal, 54-48 in the 2020 regional final).

“The history of this matchup has typically always come down to a few possessions that decide the outcome,” Moore said. “Unfortunately we’ve been on the losing side of those outcomes, but these are the games I love coaching in. The challenge of preparing and getting our team to buy in to the plan, and executing the plan, is what makes coaching my passion and so much fun.”

For the Stars, who now have a four-game winning streak, they’re looking to maintain the momentum as the postseason looms.

“I like the fact the kids have to be focused,” Allen said. “We’re playing a quality opponent, we have to be at our best. We have to play at a high level, against someone who’s pretty good, on the road.”

Last meeting: Last year at BNL, the Stars prevailed 47-40 during the Pete Pritchett Classic semifinal. Chloe Spreen had 15 points for BNL, while Josie Trabel had 20 points and 9 rebounds for the Trojans.

Game notes: BNL leads the series 8-0. The Stars rank sixth in the state in scoring at 64.2 points per game.