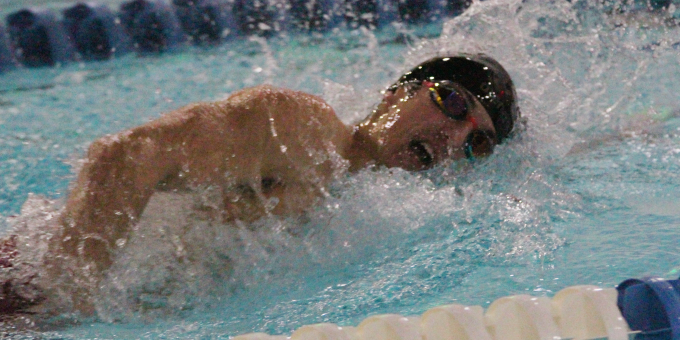 BEDFORD – Cole Baker’s favorite song, according to his Senior Night bio, is the hip-hop track “Get Low” by lil Jon and the East Side Boyz. Hey, every generation listens to something the previous ones don’t quite understand.

The question isn’t Baker’s taste in music. It’s really – how low can he go? On the clock, he’s not in limbo, he’s raising the bar as he chases school records and a berth in the state finals.

Records – the school variety, not the musical versions – were the only things that escaped Baker and classmate Emma Gabhart during the home-water farewells for nine BNL upperclassmen on Tuesday night. Making sweet music in the pool, both won twice and solidified two winning relays as the Stars honored their seniors during meets with Seymour.

He was hard on himself, “Underwhelming” was his personal critique, but Senior Night reactions and performances can be difficult to predict. There’s time left for records. This was more about the memories his class created.

“It’s always a special night,” Baker said. “The home crowd was here, a lot of kids from my school. A lot had never seen a swim meet before.”

“It’s so aggravating,” Gabhart said with a laugh. “But I’m really happy with how I did.”

“We had people close to breaking records, and with our record board that should be pretty rare to do it before tapering,” BNL coach Adam Young said. “They were right on it.”

Prior to the meets, BNL honored the seniors, with Gabhart, Slaughter, Bella Held and Katelyn Moody taking their bows from the girls team, with Baker, Bailey, Kimbley, Puckett and Cameron Miller celebrated on the boys team. The emotions were evident.

“It’s weird that it finally happened,” Kimbley said. “I’ve been here four years, and every year I keep thinking ‘OK, I’ve got one more year left.’ But now that it finally hit, it’s Iike a ‘what do I do now?’ situation. It was a very big moment of my life. It will be one of the core memories I will remember forever.”

“It’s sad, definitely sad,” Gabhart said. “I definitely cried earlier, when the first-year swimmers gave a speech about how the senior class has impacted them.”

BNL’s boys will return to action on Jan. 28 in the Hoosier Hills Conference meet. The girls will now start their tapering process for the postseason.