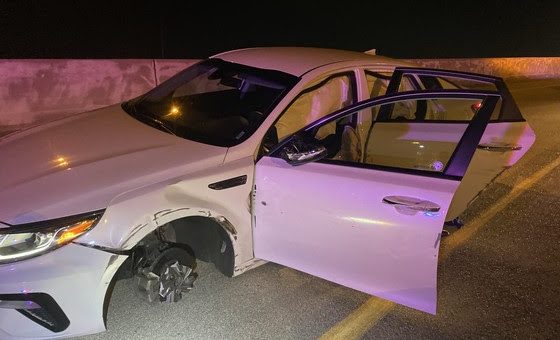 LAKE CO. – On Monday, October 3rd, at approximately 12:54 a.m., Trooper Griffin was patrolling on 25th Avenue near Chase Street when he observed a white Kia traveling eastbound in the westbound lanes. The Kia then made a left turn going north on Chase Street where it failed to stop at the stop sign posted at 23rd Avenue.  Trp. Griffin attempted to initiate a traffic stop, but the vehicle did not stop. A records check of that registration showed the vehicle was reported stolen through the Chicago Police Department.

The pursuit continued onto I-80, going westbound in an active construction zone. The vehicle drove onto the Kennedy southbound ramp where it crashed. Five occupants then fled from the vehicle, going eastbound into the brush and the retention pond nearby. Two adults and three juveniles were taken into custody.  The adults have been identified as Tyrone M. Brandon Jr., 19, from Gary, IN, and Tyrone D. Kirkman Jr., 18, from Chicago, IL.

Brandon has been preliminarily charged with the following:

Kirkman is preliminarily charged with the following:

Kirkman was identified as the driver of the vehicle during the pursuit. Also located in the vehicle were several items commonly used in thefts including numerous pairs of rubber gloves, screwdrivers, and flashlights.