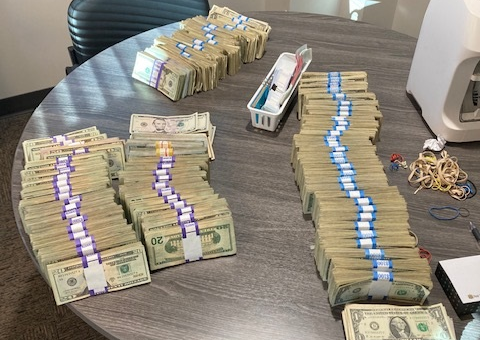 CONNERSVILLE – A lengthy investigation by troopers from the Pendleton District and detectives from the Indiana State Police Drug Enforcement Section led to the issuance of a search warrant for a residence in Fayette County.

Today, October 5, 2022, the search of the residence was completed leading to the discovery of narcotics.

The warrant was served at 5275 South State Road 1, in Connersville.

Detectives located inside the residence the following: approximately 309 pounds of packaged marijuana,  34 pounds of THC wax, over 14000 THC vape cartridges, several hundred marijuana cigars, and a multitude of various edibles including “medicated” chips and candies.

Along with the drugs, numerous assault rifles, several pistols, one fake suppressor as well as two baffled suppressors were located and seized.  A GMC Denali truck and US currency in excess of 100,000 dollars were additionally confiscated as the result of drug proceeds.

Three individuals were located in the residence.  All three were taken into custody and incarcerated in the Fayette County Jail. A toddler was also located inside the residence and the Department of Child Services was utilized to place the child.