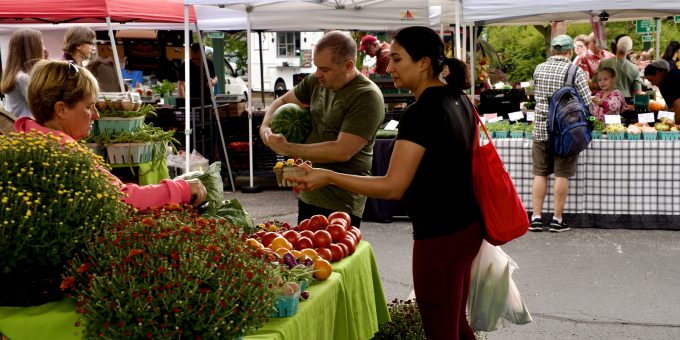 BLOOMINGTON – Chrysanthemums, nicknamed “mums,” is one of fall’s quintessential flowers.

A number of customers are enjoying the variety at the Farmers’ Market. Be sure to pick some up this weekend.

Mums are usually the last plant to bloom before frost, ushering your garden into the big sleep of winter with a last bang of color.

“Harvest for the World”

“Harvest for the World” returns this weekend to Bloomington Community Farmers’ Market.

This is an experience of sight, sound, and taste, featuring ethnic vendors, food and beverage artisans, and entertainment representing Bloomington’s international communities.

This event runs concurrently with the Bloomington Housing and Neighborhood Department’s “Blooming Neighborhoods” and the Lotus World Music & Arts Festival which ends this Sunday, September 25th.

Here are some groups scheduled to perform at Harvest for the World:

When Dan Kusaya moved to the United States, he became a one-man band. He does live looping of several instruments while performing his own original songs plus other world music.

This includes storytelling of traditional Zimbabwean songs and music with new Afro-centric interpretations of traditional sounds and songs dating to a time when music was believed to have magical properties.

Ana Nelson is a clarinetist, saxophonist, composer, and arranger known for her multi-genre diversity in classical and jazz. Ana has performed with a variety of groups and artists across the Midwest.

As a recording artist, Ana has appeared on recordings with Bootsy Collins for his remix of the “Indiana Fight Song,” Indiana University Jazz Ensemble performing “Gennett Suite” recorded for WTIU TV, and releases for Oberlin Orchestra and IU New Music Ensemble. Accompanying her on Saturday will be Andre Jamal Cardine Jr. Currently, Ana is pursuing a Doctorate in Clarinet Performance.

Performance Schedule for “Harvest for the World”

Featured Vendors during “Harvest for the World”

Pinoy has started doing Pop-up events and you can catch them at Food Truck Fridays at Switchyard Park, Saturday & Tuesday Farmers’ Markets they also have catering services.

Canku Luta is a national nonprofit organization headquartered in Bloomington with a field office on the Cheyenne River Lakota Reservation in South Dakota.

Angela Caine manages the Canku Luta booth and provides a wide variety of “heirloom vegetable seeds”. Heirloom denotes that these seeds have a documented heritage of being passed down from generation to generation within a family or community.

Canku Luta, in the language of the Lakota people, means Red Road. Canku is pronounced “chunk uh” and means “road” Luta has a long “u”.

Whether you are craving gringas, nachos, burritos, quesadillas, or tacos, you can find these and more authentic delicacies this Saturday at Pili’s Party Taco.

Pili’s food truck is one of several food and beverage vendors that you can frequent on Saturday’s at the Bloomington Community Farmers’ Market. The genesis of Pili’s began when Pilar Gonzalez moved to Bloomington, she missed Mexican cuisine from her home of Puebla, Mexico.

Oluwanifemi Ologunorisa is the proprietor of  “Homemade by Nife”. All of her products have their origin in West African culture, specifically Nigeria.

One of her specialty dishes, “Puff-Puff” is a deep-fried dough shaped into balls while Chin-Chin is a fried or baked crunchy snack cut into small inch squares. The pie pastries have a chunky filling of meat, vegetables, chicken, and other savory ingredients.

Shu Jou and Ping Chang are proprietors of Chang’s Produce.

Mayor at the Market is a community outreach program that invites Market-goers to interact with the mayor and various department heads from the City of Bloomington government. From the arts to potholes – any city-related topic you are interested in is up for discussion.

Andrew Cibor Director of the Department of Engineering will be greeting the public from 10 a.m. to 12 p.m. at this Saturday’s Farmers’ Market.

This Saturday the HAND department will host an opportunity to network, share, and celebrate neighborhood accomplishments. Neighborhood representatives and members of community organizations will assemble on the terraces under the trees in front of City Hall for fellowship and fun.

This year’s theme is “Neighborhood Networks: Growing Stronger Together“.

The Farmers’ Market Advisory Council represents Market vendors, customers, and food and beverage artisans. The Council acts in an advisory capacity on policy matters relating to the Farmers’ Market. The next Meeting is Monday, October 17, from 5:30 p.m. until 7 p.m.

The final Tuesday Market of the 2022 Season ends on September 27.