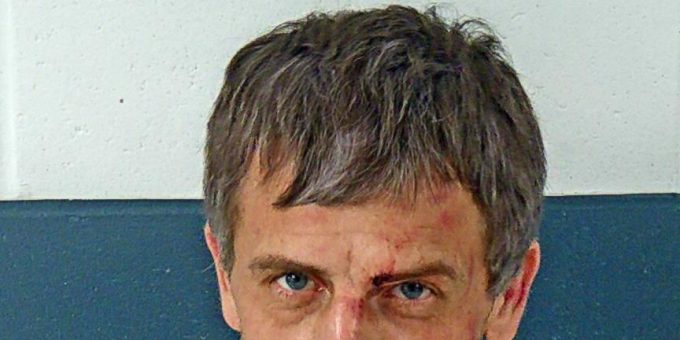 BEDFORD – A Bedford man was arrested Tuesday after Lawrence County Central Dispatch received a call at 8:36 p.m. requesting a welfare check on a woman in the 300 block of Farmer Street.

The caller said 43-year-old David Johnson was at the home and the caller was worried about her grandmother because of Johnson’s mental state and the possibility he was intoxicated.

Deputies responded to the home and informed Johnson they were there to check on the welfare of a female and to do that, they must talk to her.

Johnson told the deputies to leave and proceeded to enter and exit the residence.

An officer noticed Johnson had a large cut above his left eye with blood running down the side of his face.

The officers repeatedly asked to speak to the woman they came to check on but Johnson continued to tell them to leave.

Police say Johnson “ was not in the right state of mind and was erratic, passing back and forth in the house and injured”.

He then began yelling inside the residence, opening and closing the door multiple times in a row, and doing laps around the outside of the house.

Officers said Johnson was “a danger to himself due to his mental state”.

Officers continued to attempt to talk to Johnson, while another officer proceeded into the house to check on the female.

Officers were unable to locate the female but found the house “a wreck” with numerous items on the floor and thrown throughout the residence.

After a third time, of using the TASER, Johnson was detained. Neighbors heard the commotion and assisted the officers. Two neighbors held Johnson’s legs while officers handcuffed him.

Johnson continued to resist officers and refused to enter the police vehicle. He kicked the officers and hit one in the head.

An officer transported Johnson to IU Health Bedford Hospital for treatment of the cut on his head and a medical evaluation.

The neighbors told police the woman they were there to check on left earlier, after Johnson had trashed the house.

Johnson was cleared by the hospital and was arrested on charges of public intoxication, resisting arrest, and disorderly conduct.