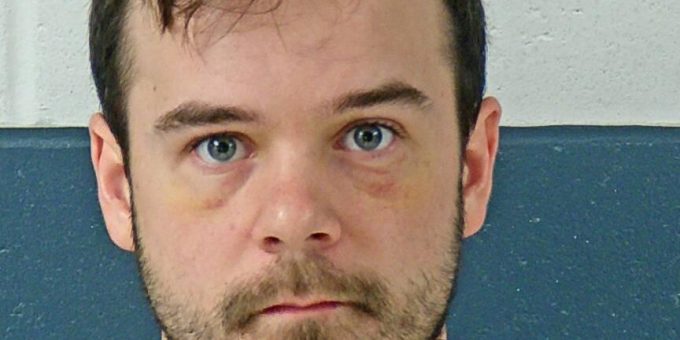 BEDFORD – A Bedford man was arrested on Tuesday when Bedford Police officers were requested to Shorty’s Den on 7th Street at 10:40 p.m. after a report of a vehicle leaving the scene of an accident.

The caller reported that 33-year-old Robert McGaha was leaving the bar in a silver Jeep and was possibly intoxicated. The caller said McGaha hit a white pickup truck before leaving the parking lot and was traveling south down an alleyway.

A female told police she saw the accident, walked in front of the Jeep, and yelled at the male to stop. She said McGaha looked at her, accelerated, and hit her. The hit knocked her back several feet and caused her to fall. The woman suffered pain in her stomach but she denied medical attention.

The manager at Shorty’s told police that he heard the woman scream and went out to see what the issue was. The Jeep was speeding out of the parking lot in an unsafe manner. He told police McGaha patrons the bar often and recently has been causing disturbances. He stated that he had kicked McGaha out multiple times due to his behavior.

Officers went to McGaha’s home at 2618 16th Street and located the Jeep parked in the driveway.

Officers made contact with McGaha at the front door of the residence. He appeared to be intoxicated. He had slurred speech and was unsteady on his feet. McGaha then stated they “couldn’t do anything to him because he already made it home”.

McGaha refused to answer the officer’s questions and resisted when the officers attempted to detain him.

Officers then forcibly placed McGaha against the wall and placed him into handcuffs.

McGaha was transported to the Bedford Police Department where he refused a chemical test and field sobriety tests.

A warrant was requested for a blood draw and was granted by Judge John Plummer III.  McGaha was transported to IU Health Hospital where he had to be forcibly restrained during the blood draw.

McGaha was medically cleared and transported to jail on charges of battery with a deadly weapon, criminal recklessness with a deadly weapon, leaving the scene of an accident, resisting arrest by force, operating a vehicle while intoxicated, OWI endangerment, OWI with a prior conviction, and OWI refusal.