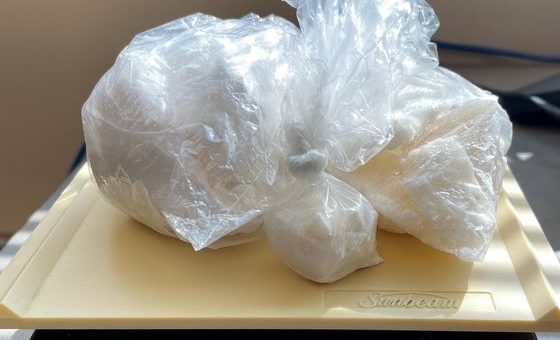 INDIANAPOLIS- An Indianapolis man was arrested on drug and gun charges this morning after a Trooper spotted him driving with no headlights on.

At 6:26 a.m. Master Trooper Justin Hobbs was driving on I-465 near U.S. 31 on the south side of Indianapolis when a Dodge Ram pick-up truck approached him from behind with no headlights on. It was still dark and there was fog in the area, so Trooper Hobbs got behind the truck and pulled it over.

The driver verbally provided a false identity, however, Trooper Hobbs was later able to determine the man driving the truck was 35-year-old Harvey W. Pettrie of Indianapolis. A subsequent records check revealed Pettrie had active felony arrest warrants for various charges. Pettrie was detained, and the vehicle was searched.

During the search, troopers located a handgun, and three baggies containing a white powder, which later tested positive for cocaine. A passenger in the vehicle was detained, however, she was later released from the scene at the conclusion of the preliminary roadside investigation.

The preliminary weight of the three bags of cocaine was 179 grams, the actual weight will be determined by the Indiana State Police Laboratory.

This arrest was based on probable cause, all charges listed are preliminary. Actual criminal charges will be determined by the Marion County Prosecutor’s Office upon review of the case. All crimes mentioned in this release are alleged and all suspects are presumed innocent until and unless proven guilty in court.

Trooper Hobbs was assisted in this investigation by Master Trooper Hank Kalina and Trooper Chris Stout.