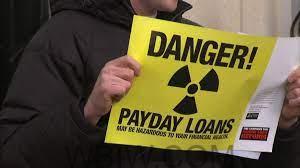 INDIANA – As consumers lost jobs and struggled to make ends meet during the COVID-19 pandemic, many turned to payday loans and other short-term solutions, with an increase in online solutions.

This not only allowed predatory lenders to thrive – many borrowers still contend with sky-high interest rates and opaque fees – but also created a fertile environment for scammers, according to a new in-depth investigative study by Better Business Bureau.

Payday loan laws are handled on a state-to-state basis among the 32 states in which they are legal, and a complicated web of regulations makes the impact of the industry in the U.S. tough to track. The BBB study finds one common thread, however, in the triple-digit interest rates many of these loans carry – camouflaged by the interest that is compounded weekly or monthly, rather than annually, along with significant rollover fees.

From 2019 to July 2022, BBB received nearly 3,000 customer complaints about payday loan companies, with a disputed dollar amount nearing $3 million. Additionally, more than 117,000 complaints were lodged against debt collection companies at BBB.org. Complainants often said they felt ill-informed about the terms of their loans. Many fall into what consumer advocates call a “debt trap” of stacking interest and fees that can leave customers to pay double the amount they originally borrowed.

One man in Gary, Indiana, reported to BBB recently that over the course of his $600 loan, he’s been charged finance fees of $2,427. “I tried to reason with them, that I have paid $720 and they still want me to pay more,” he wrote. “I tried to reason with them that there is No way I agreed to something like this. But my issue was not resolved. They tried to tell me I signed an agreement, but I know I didn’t.”

Scammers didn’t miss an opportunity to take advantage of consumers, either, with BBB Scam Tracker receiving more than 7,000 reports of loan and debt collection scams representing roughly $4.1 million in losses.

Posing as payday loan companies and debt collectors, scammers arm themselves with stolen information to convince consumers to hand over bank account information and cash.

A Fort Wayne man reported to BBB that he received a letter in the mail that stated he owed 15% of his Social Security in order to resolve a debt through the Veterans Health Administration. The letter came from a Birmingham, Alabama address. The victim reported losing $270.80 to the fake debt collector.

“BBB’s study advises consumers to do careful research into all their borrowing options – as well as the terms and conditions of a payday loan – before signing anything to take out a short-term loan,” said Rick Walz, President and CEO of BBB Serving Northern Indiana.

Where to report a payday loan scam or register a complaint:

Find more information about this study and other BBB scam studies at BBB.org/scamstudies.