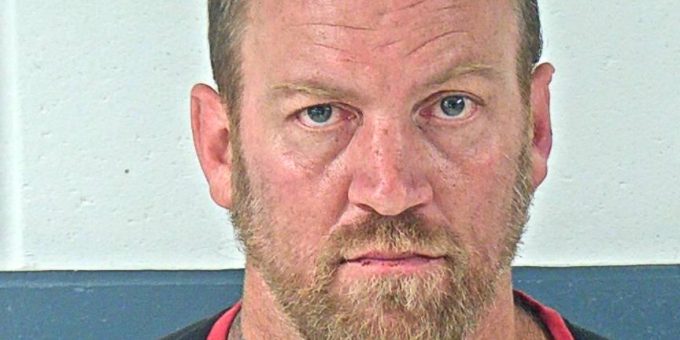 MITCHELL – A Mitchell man was arrested Thursday, September 1, when Mitchell Police officers were called to 127 East Frank Street at 10:05 p.m. after a report of a domestic fight.

When officers arrived they noticed blood smears on the front door. A distraught female answered the door. Standing behind the woman was 42-year-old Philip Middleton. He told police “someone broke into our house and kicked the door in”.

The woman was asked to step inside the home to speak to an officer.

The officer noticed broken glass and more blood splatter on the floor.  One of the broken glass items was a beer bottle.

An officer noticed blood on Middleton’s arms and hands. There was also additional blood splatter on the floor and on the female.

Middleton was detained outside while officers investigated.

The woman who was inside the home reported she had left and walked up Frank Street park because Middleton was mad but he wanted her to come back to the house.

The officer noticed the woman had blood on her left arm, chest, the side of her face, nose, and forehead. Her left eye was red and turning black. She also had red marks and blood around her neck.

Officers said the woman was hesitant to answer questions saying she didn’t want Middleton to go to jail.

An ambulance responded and treated the woman and Middleton who both suffered minor abrasions.

Middleton denied he did anything wrong and did not injure the woman.

Police say Middleton had been drinking.

Outside of the home officers found a shattered television and wooden furniture with blood on them. Near a car, police found a broken beer bottle and blood on the door handle of the car. Blood was also on the passenger seat, middle armrest, and steering wheel. There was a beer bottle in the cup holder.

Middleton told police he threw glass and bottles inside the home because he was mad about someone breaking into his house.

An officer told the woman “this is one of the worse scenes I’ve seen” and she replied, “it has gotten way worse than this before”.

While on the scene, another female arrived and told police Middleton had a drinking problem and would get “super drunk” and get abusive.

While police were investigating, Middleton became uncooperative and began yelling. He had to be forcibly placed into a police vehicle. He continued to yell and rock the police car back and forth. Middleton was taken to IU Health Bedford Hospital for a medical evaluation and then transported to jail on charges of strangulation, domestic battery in the presence of a minor, and domestic battery.