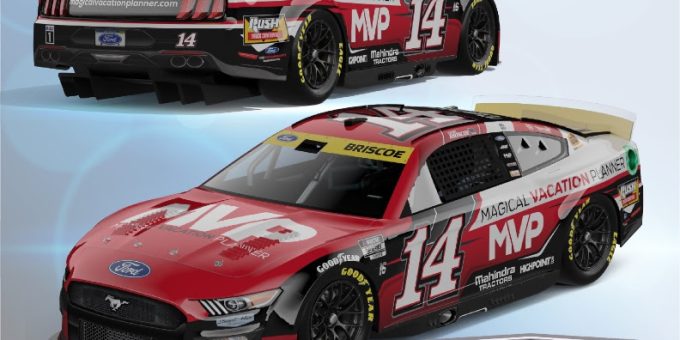 KANSAS – Magical Vacation Planner (MVP) returns to Chase Briscoe’s No. 14 Ford Mustang for the Hollywood Casino 400 at Kansas Speedway in Kansas City. The Stewart-Haas Racing (SHR) driver enters Sunday’s race 15th in the playoff standings after a 27th-place finish in last Sunday night’s Cook Out Southern 500 at Darlington (S.C.) Raceway thanks to an early incident that put him multiple laps down.

He is 10 points below the cutoff to advance to Round of 12 with two races remaining in the opening Round of 16.

“Thankfully, the points situation is much better than I expected, but we’ve still got to have two solid races. I felt like Darlington was where we’d struggle the most out of these first three tracks,” added Briscoe. “The plan for Kansas and Bristol is to get some stage points and be there at the end. We don’t necessarily need a win, even though that would make it a lot easier, we just need to have a really good points day. Wouldn’t be a bad thing for a couple of guys to have problems again, but we just need to do our job and we’ll be OK.”

The Cup Series visited Kansas in May when Briscoe qualified 12th and finished 24th. Though the first Kansas race of the year didn’t go as planned, the No. 14 team has shown strength at 1.5-mile tracks this season with Briscoe running up front at Las Vegas in March and battling for the win in the Coca-Cola 600 at Charlotte (N.C.) Motor Speedway on Memorial Day weekend. In 2021, Briscoe earned a pair of top-20 finishes at Kansas with a best of 19th in the October event.

The first visit to Kansas this year didn’t go as well as the team expected, but you’ve run well on other mile-and-a-half tracks this year. Does that give you the confidence you and the team need this weekend?

“Yeah, it does. I think we were trying things that we thought were going to be better based on sim and what was being shown on paper, and now we know that isn’t the case,” said Briscoe. “We were able to go back to some of what had been working for us and I think that really showed in some of the more recent races we’ve run, like Charlotte. For the most part, Kansas isn’t much different than what it has been compared to some of these tracks that race so differently with the new car. We’ll be running the fence all day and just hoping not to make a mistake that takes us out of it.”

Briscoe also won the 2016 ARCA Menards Series finale at Kansas after starting from the pole. He led twice for a race-high 67 laps to secure the victory by 1.464 seconds over Austin Cindric. His 14 top-fives and 18 top-10s in 20 ARCA races that year helped him clinch the championship in his rookie season.

MVP was founded by Jamie Ane Eubanks alongside her husband JJ, a former professional basketball player, as a storefront travel agency in 2006. Today, it is a company that provides one of the best vacation planning services in the industry. It operates through three branches: MVP Parks, MVP Cruising, and MVP Getaways. The company provides its exclusive and personalized, stress-free planning service at no additional expense to its clients, making the extensive array of Disney options and add-ons easy to understand and navigate. MVP actively seeks savings for its clients, monitoring early-morning releases of the discounted room or vacation packages while also scouring existing reservations for price drops to where they can modify an existing reservation at the newfound lower price. MVP will also plan a family’s itinerary, expertly navigating Disney’s Genie + and Lighting Lane systems to maximize resort and park times by avoiding long lines while also securing those premium Disney dining experiences that include coveted character meetings.