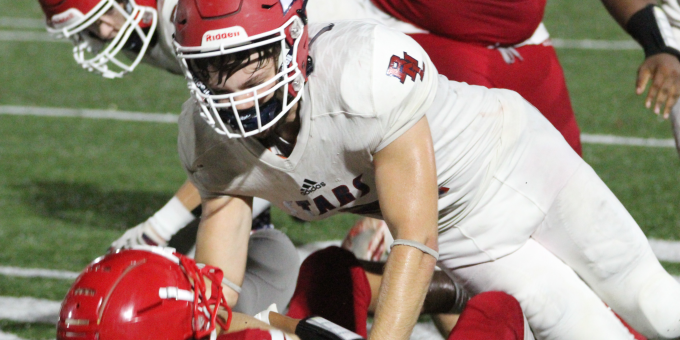 BEDFORD – Of all the miracle cures available on the legitimate and questionable markets, all the pop-a-pill remedies for everything from weight loss to testosterone, the best medicine is still winning. So many ailments and issues vanish in victory. Bedford North Lawrence, suffering and headed toward intensive care, discovered that healing elixir.

On the verge of code red, with the defibrillator poised above the prone patient, the Stars swallowed hard and shocked everyone with a tremendous comeback triumph last week at Jeffersonville. Down by 18 points, about to be declared dead, BNL found the cure – although it was really not miraculous. Just play better. Take two fourth-quarter touchdowns and call the doctor in the morning.

The impact of BNL’s thrilling 19-18 comeback win, like a governor’s reprieve call for a death row inmate, cannot be overstated. The Stars live again, injected with life-force energy and enthusiasm after a second-half rally for the ages. Now the question centers on BNL’s ability to recover from the inevitable crash after the adrenaline rush, recapture that fire, and win again.

The Stars (1-2 overall) will look to remain unbeaten in the Hoosier Hills Conference when they go back on the road to face New Albany on Friday night. The Bulldogs are the defending league champions, the first time any team other than Columbus East can make that claim in over a decade. Can BNL’s momentum carry over?

“When the lights come on, we’ll be right back ready to go,” BNL coach Derrick Barker said. “If anything, we’ll have a little more energy and confidence, that extra fire.”

The comeback was fueled by offensive plays – Ryker Hughes with the touchdown catch, Cal Gates with the breakaway TD run, Trace Rynders with the breathless game-winning catch. Yet lost in that smoke was the contributions of an underrated defense. They made plays. Colton Staggs with a fourth-down pass deflection in the end zone, Maddox Ray’s fumble recovery in the end zone, Kaedyn Bennett’s second-half interception, Dawson Axsom’s two sacks, and the second-half shutout were all key.

“We’re not totally shutting down the opponent, but when we need a play, we get it,” Barker said. “At some point in the second half, to put together a comeback like that, you have to get a turnover. It’s huge, to have something positive happen. The first two weeks, a lot of the breaks didn’t go our way. We made a lot of mistakes. The kids played really well in the second half, and you could see, when we do things the way we’re supposed to do it, when we play hard, we’re capable of putting halves together. It was good validation to build some momentum.“

“It was great for morale and momentum,” Bennett said. “We needed it, for sure. I knew we could do it. I’m not sure I thought we would. We definitely have the potential to do that both halves.”

New Albany’s record matches BNL’s. The Bulldogs fell to Bloomington South (34-14) and Gibson Southern (45-7) the first two weeks, then started their league title defense with a 27-21 win over Jennings County. And like BNL, they are searching for solid offensive footing.

The Dogs were a power last season, winning the Class 5A regional crown. But they suffered huge graduation losses and have fought through an identity crisis. Who are they? What will they become?

“We lost 6,000 yards of offense, but we’re slowly getting back on track,” NA coach Steve Cooley said. “It’s going to take a little bit, but we knew that. That’s hard to replace. As our quarterback play goes, our offense will improve. We’re starting to find our identity, so the next few weeks are crucial for us.”

New Albany will feature running backs Elijah Jennings and Dakota Johnson, splitting time between quarterbacks Dorian Weathers and sophomore Kenny Watson. The big (emphasis on big) key is offensive lineman William Spencer, a 6-5, 315-pound transfer from Louisville Male who is a 4-star recruit with offers from Kentucky, Louisville and Mississippi State. That man mountain could allow the Dogs to duplicate last year’s frontline dominance against BNL.

Last year at BNL, New Albany pounded out fierce numbers: 27 first downs, 85 plays, 440 total yards. BNL was bullied into submission during a 27-16 loss that left the Stars with a collective bloody mouth.

“At the end of the day, that’s exactly how they still want to play,” Barker said. “They want to control the ball, run a lot of plays. They’re strong up front. They look to wear down the other team and bully you.”

BNL will seek to establish consistency on offense. That first half at Jeffersonville was as brutal as the second was beautiful. Memphis Louden has completed 35 of 74 passes for 366 yards and five touchdowns, although no clear top running back has emerged. It’s no coincidence that BNL ran the ball successfully during the second-half comeback.

“They’re a tough, gritty team,” Cooley said. “We have to stop the running game, we have to contain Louden. He’s got a strong arm and does a good job scrambling, chucking it down the field and making plays.”

BNL is chasing its first HHC title since 2006. There’s still a lot of yardage to cover in that pursuit. But the trampoline effect from the first win could vault the Stars a long way.

“It was a confidence booster,” Bennett said. “We have to execute again this week to win. We’ve come down from that. We were low enough after the two losses. We’re where we should be.”

Last meeting: Last year at BNL, Kyondre Winford rumbled for 113 yards and a touchdown as the Bulldogs ran over the Stars 27-16. New Albany totaled 27 first downs and 440 total yards. Memphis Louden had a touchpass pass and a TD run for BNL, which was guilty of 12 penalties.