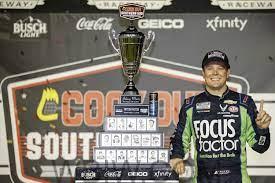 DARLINGTON, S.C. – On Sunday night, Erik Jones, of Petty GMS, held off a former teammate in Denny Hamlin, who ran out of time in his pursuit of Jones and finished in the runner-up spot, .252 seconds behind the race winner.

This was Jones’s third career NASCAR Cup Series victory, his first of the season, and his second at Darlington.

Jones was the 17th different winner in the 27 NASCAR Cup Series races run this season.

Jones got his chance at the front of the field when Kyle Busch, who had led a race-high 155 laps, suffered a blown engine as he prepared for the final restart. Busch had inherited the top spot when his Joe Gibbs Racing teammate, Martin Truex Jr., suffered a similar failure on Lap 333 of 367.

After a catastrophic Playoff opener, Elliott, the regular-season champion, is the series leader no more.

Chase Elliott spun sideways in Turn 2 on Lap 113, two laps short of the end of Stage 1, cracked the back of his No. 9 Chevrolet, and slid down the track into the path of Chase Briscoe, who couldn’t avoid the collision.

Elliott nursed his car to pit road where his team tried in vain to repair the damage, but with the right rear toe link and upper and lower control arms broken, the task was hopeless. The 10-minute time allotment under NASCAR’s damaged vehicle policy ran out, and Elliott retired from the race in last place (36th).

“We just really struggled with the balance. At the beginning of the race, we were starting off extremely tight and then we got to where we were extremely loose, and then we had nowhere to go with the 9 car (Chase Elliott) when he wrecked. That kind of killed our day, but we were able to get lucky because a lot of those guys had issues, too. It’s not the way we wanted to start the round, by any means, but we’re going to have to improve and we’re probably going to have to win. I don’t even know what the points look like, but we shouldn’t have been in that situation where we were struggling, anyway. We just couldn’t find the balance. It’s unfortunate, but we know what we’ve got to do now and that’s what we’ll try to go do,” said Chase Briscoe, driver of the No. 14 HighPoint.com Ford Mustang.

The 15-point advantage Elliott carried into the Playoffs was gone. Elliott scored the minimum one point for his efforts at Darlington and fell to ninth in the Playoff standings, 14 points ahead of 16th-place finisher Austin Cindric in 13th.

A solid run by 2014 series champion Kevin Harvick went up in flames on Lap 275. As he lost speed while running ninth, Harvick radioed to his crew, “My rocker panel’s on fire.”

Flames erupted on both sides of the car. Harvick parked the No. 4 Ford on the apron and scrambled from his smoke-filled cockpit. Harvick exited the race in 33rd place and dropped to the bottom rung of the Playoff standings, 13 points below the current cut line.

“The car started burning and as it burned the flames started coming through the dash. I ran a couple of laps and then as the flames got bigger it started burning stuff up and I think right there you see all the brake fluid that was probably coming out the brakes and part of the brake line, but the fire was coming through the dash. What a disaster for no reason. We didn’t touch the wall. We didn’t touch a car and here we are in the pits with a burned-up car and we can’t finish the race during the playoffs,” said Kevin Harvick, driver of the No. 4 Busch Light Retro Ford Mustang.

There were nine caution periods for a total of 58 laps.

Only 18 of the 36 drivers in the Cook Out Southern 500 finished on the lead lap.

Playoff Standings (with two races to go before Round of 12):

Aric Almirola earned his 13th top-15 of the season and his eighth top-15 in 15 career NASCAR Cup Series starts at Darlington. This was Almirola’s second straight top-15 at Darlington. He also finished 11th in the series’ prior visit to the track in May.

Cole Custer earned his eighth top-15 of the season and his third top-15 in seven career NASCAR Cup Series starts at Darlington.

The next event on the NASCAR Cup Series schedule is the Hollywood Casino 400 on Sunday, Sept. 11 at Kansas Speedway in Kansas City. The second race in the 10-race NASCAR Playoffs starts at 3 p.m. EDT with live coverage provided by USA and SiriusXM NASCAR Radio.