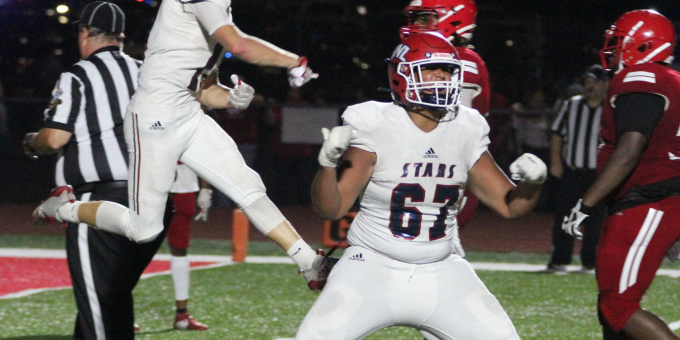 JEFFERSONVILLE – Like the famous Irish toast, Bedford North Lawrence got to heaven 16 seconds before the Devils knew their victim wasn’t dead. Last rites had been administered, but BNL was only “mostly dead.” As Miracle Max stated, “There’s a big difference between mostly dead and all dead. Mostly dead is slightly alive.”

After a lifeless, dismal first half, the Stars were resurrected, capping an astonishing comeback when Memphis Louden found receiver Trace Rynders for the game-winning touchdown. That celebration roar was far greater than the obnoxious cannon Jeffersonville explodes after each of its touchdowns.

The Louden-Rynders connection with 16 seconds left completed BNL’s stunning 19-18 road victory in the Hoosier Hills Conference opener Friday night at Blair Field. Down 18-0 at halftime, left for dead after a most dreadful performance, the Stars rose from the grave and ruined Jeffersonville’s Senior Night festivities. Never issue last rites until the last pass.

And that last pass will go down in BNL lore. Louden’s 24-yard strike to Rynders, who found open space between two defenders in the back of the end zone, set off raucous revelry on the BNL sideline. Years from now, the Stars will sit around in rocking chairs and retell this tale, and future generations will probably roll the eyes, doubting the authenticity of the story. In this case, no embellishment will be needed.

Trailing by three scores midway through the third quarter, BNL (1-2, 1-0) started climbing from the crypt. Down 18-13, taking over 76 yards from the end zone with only 2:08 left, the Stars pulled off a Miracle in River City. From dismal to dancing, from deceased to breathless, from vanquished to victory.

Before the final drive to glory, BNL had a lot of work to do. The rally started quietly, with Louden lofting a 19-yard touchdown to Ryker Hughes at the 6:29 mark of the third quarter. After missing a red zone scoring chance to end the quarter, the Stars got into comeback position when Cal Gates broke free for a 38-yard touchdown blast with 4:51 left.

BNL got the ball back with only one timeout left, and the clock management wasn’t the best. Louden scrambled to convert a first down, Dylan Nikirk darted nine yards and got out of bounds, but then the Stars attacked the middle of the Jeff defense on the ground, and there was some sideline grumbling as the clock ticked and a penalty set them back.

Facing third-and-15, the next three plays might end up defining an entire season. Louden found Nikirk for 7 yards. Louden went back to Nikirk again, and he made a superb catch while absorbing a helmet hit from a defender. The personal foul penalty added 15 yards, and suddenly the Stars could see the finish line. They got there on the next play.

Fading back, rolling right, Louden spotted Rynders crossing the back of the end zone. He didn’t hesitate. Rynders made a leaping grab, then set a personal record with his vertical jump in celebration. Who knew he had those kind of hops? Adrenaline is a powerful drug.

“I saw Memphis roll out to the right side, and I cut to the middle of the end zone,” Rynders said. “We kind of made eye contact. From there, it was over.

“I’ve never felt this way before. It’s crazy, it all feels like a dream. I’m glad we could came out and won, as a team, step up in the second half.”

Let’s talk about that first half. It was a mess, from allowing a big-plays touchdown, to special teams implosions – a bad snap that forced punter Ryker Hughes to put a knee down to field it, thus a 15-yard loss. Plus a flag what wiped out a punt return TD. Plus a failure to field a short kickoff – to a pick-six interception, to BNL’s utter failure to show any offensive life. The Devils (0-2) scored on their first series, when quarterback Nik Schindler heaved a deep pass down the left sideline, and Don Starling made a twisting catch and left defenders in his wake for a 65-yard touchdown.

In the second quarter, after BNL finally recorded its initial first down with 6:08 left in the half, disaster struck. Louden’s drifting pass in front of the BNL bench was snatched by Jeffersonville’s Kyon Stephenson, who raced 54 yards in the opposite direction for a 12-0 lead. The Stars dodged more trouble when Maddox Ray recovered Zion Mansfield’s fumble in the end zone, but the Devils came back for a Schindler-to-Starling TD from four yards with 12 second left in the half.

Few would have thought BNL capable of breathing any life into its performance after that half. “It was quite frustrating,” Louden said. But then he revealed his mindset. “I knew we would win this game.” Really? Outside of the locker room, that outlook was rare.

“The first half looked bad, but it was an example of controlling the game and not controlling the scoreboard,” Barker said. “We weren’t getting things communicated. It was one play here or there, and we dug ourselves a hole. But I told them I had no doubt we could get back in it.” And he was quick to recall BNL’s last visit to Blair, when the Stars rallied from a 20-0 deficit in the second half for a 23-20 win in 2019. So there was precedent.

“We had to stick together and wouldn’t make it through if we didn’t,” Rynders said. “We did what we should have done all game.”

Louden finished a modest 8 of 15 passing for 77 yards, but he will always remember that best throw of his life. “I just saw the window and threw it,” he said. Gates was the leading rusher with 61 yards, although BNL made a concerted effort to establish the run with 174 as a team. Dawson Axsom led the defense with two sacks.

Schindler was 11 of 14 passing for 166 yards, and Starling caught 6 for 144. But when Schindler and Mansfield went out with injuries, the Devils sputtered on offense, another reason BNL had a chance to rally. “We caught some breaks,” Barker said.

Bottom line? The Devils are 0-2, both league losses, both with late scores in the final quarter. That’s hard to take. On the flip side, BNL avoided its first 0-3 start since 2014 and got an incredible injection of confidence and momentum.

“It’s huge,” Barker said. “I don’t even want to think about what Monday morning looks like if we’re sitting 0-3. That second half showed some things we can build on.”

BNL will go back on the road next week, visiting New Albany.