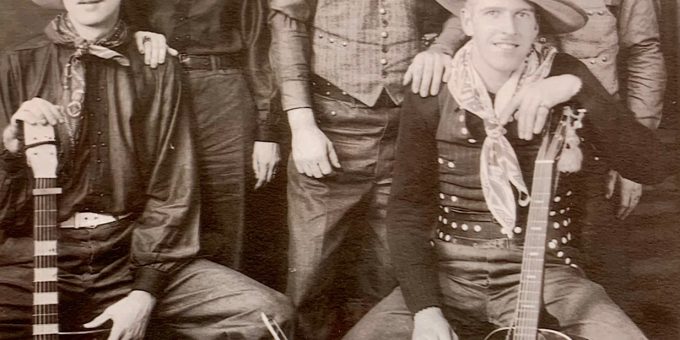 MITCHELL – For nearly two decades, Woody White would load his pump organ on a trailer and travel 20 minutes north to Mitchell, where he’d station it near the old Main Street stage in downtown Mitchell for the annual Persimmon Festival.

Jovial, carnival-type music would greet visitors, adults and children alike, as the downtown filled with masses of festival-goers. Throughout the 1960s and 1970s, Woody brought his own brand of atmosphere to the Persimmon Festival, delighting anyone who had the opportunity to revel in the rides, sample the food and reunite with old friends.

Woody has passed away, but the memories he created continue and will be brought to life at the 75th annual Persimmon Festival by Mitchell’s Eric Robertson. Robertson will bring back the sounds of Woody White from 5-6 p.m. Monday, Sept. 19, through Friday, Sept. 23.

“There are generations of people who remember the days when Woody White would set up downtown and perform,” said the 75th Persimmon Festival Committee of Mark Bryant, Don Caudell II, Larry Caudell, Tonya Chastain, and Krystal Shetler. “We wanted to bring back that little piece of history and introduce it to the generations of Mitchell residents who were born after Woody quit performing downtown. We want to give them a little glimpse of what the festival looked like in the 1960s and 1970s. There is simply nothing quite like the jovial sounds of a pump organ playing as youngsters explore the exciting offerings of a festival and its carnival.”

After announcing plans of bringing the Woody White Tribute Show to the Persimmon Festival, it wasn’t long before the planning committee received quite the surprise when it heard from Woody’s family members – most of whom still live in the area.

During a recent visit, Woody’s son, JR White, who is named for his father as Woody White Jr., but has gone by the stage name of JR White, regaled the festival committee with stories of his father, as well as his own storied musical career. JR, who is now 84, was accompanied on his visit to Mitchell by his son, David White. The two both live in New Albany.

The first order of business for JR was, of course, to delight in the persimmon pudding served up to him, courtesy of Judy Shaw. He said his wife still has the recipe for the 1962 winning persimmon pudding by Bessie Cooper. His Dad brought it home from the Persimmon Festival and JR’s wife, Becky, saved it and mastered it.

Woody was a well-known musician throughout the area. He often joined in for jam sessions at the Green Lantern in Mitchell back in the day. He worked as a Fuller Brush salesman during the day and spent his nights performing.

In fact, one night, a man came by his house looking for Woody to join his band. His name was Leonard Franklin Slye, and he was from Ohio. However, Woody turned him down. Just before the man left his house, however, Woody asked him what he planned to use as his stage name and what he wanted to call his band. The man replied, “Roy Rogers and the Sons of the Pioneers.”

“Two years later, ‘Cool Water’ and ‘Tumbling Tumbleweed’ came out, but Dad never looked back on his decision,” JR said. “He said there was something about the man he didn’t like, and he just left it at that.”

Woody, however, wasn’t the only one in the White household who had musical blood running through his veins. Ruth, his wife, was a great singer and could yodel. She is the one who taught JR to sing. His Dad “taught” him to play the guitar.

“He gave me an old Silvertone, and he showed me the chords G, C, and D, and that was it,” JR said. “From there on out, I learned all the chords. Like Dad, I could never read music. We just played by ear. I still can’t read music. I tried, but I never could understand it.”

JR went on to find some success in the music industry. However, he never took the major leap into the industry because of his wife and family.

“Back then, you were on the road constantly, and there were a lot of drugs, alcohol, and constant partying,” said JR, who tried to emulate Hank Williams, with what he calls his “country moaning” that he learned from yodeling with his mother.

“He could’ve made it big,” David said. “I listen to his songs today, and I’m still blown away.”

JR started with music at an early age. He was 9 months old, sitting atop an accordion case while his parents participated in jam sessions. Woody was a showman. When he’d play the organ, one song would just morph into the next without a break, as he danced in his seat.

“Dad traveled a lot, and he was gone a lot,” JR said. “He would always say, ‘Do whatever you can to accomplish what you can by 1 o’clock and take the rest of the day off.’ He made a living selling Fuller brushes, did well, and supported our family doing it, but his love was music. When he was done work, he would head to play at the French Lick Sheridan Hotel. He also traveled to fairs, concerts, and carnivals … he just loved to play for people. He loved playing in French Lick and the Persimmon Festival because, ultimately, he loved the entertainment portion of it all. Dad had many opportunities to go further with music, but he was a happy guy staying at home, raising his kids, and playing locally.

“Dad was the kind of guy who liked to be upfront. He’d take songs and mix them all together, and he could go on for more than an hour nonstop.”

David was the first grandchild and grandson in the family. His career would often take him to Jasper, allowing him to travel through Paoli once a week, where he’d stop in and visit with his grandparents. Woody was a known storyteller, so David took most of what he’d say with a grain of salt.

“I had a really close, long-standing relationship with him,” David said. “He’d always tell me stories, and I’d always tell him he was full of baloney.”

David called Hamilton’s Washington, D.C., office after looking up the number in the phone book. He explained who he was, and the receptionist said she would give the message to Hamilton and have him call him back.

“I thought, ‘Yeah, right,’ and just left it at that,” David said. “This is when the Iran Contra Affair was going on, and I figured there was no way someone like Lee Hamilton would have the time to call me back.”

A week or two passed, and one day at work David heard, “David, Line 2, Congressman Lee Hamilton is on the phone.” The first thing Hamilton said to David was, “How in the world is Woody White?” David was floored; his grandfather was telling the truth.

“When I went to tell grandpa, I know I had this grin on my face because you see, he was tighter than bark on a tree, and he had said if he ever played at the White House, he’d pay for everything,” David said.

David booked a flight on the Piedmont Airline to Washington, D.C., and made the hotel reservations. The two were on their way.

“I guess he opened that old pickle jar full of money he had hidden in the closet and got some money out,” David said. “When we went to the White House, he was dressed like someone from the mafia. He was slick. When he started playing, there was no break in between songs. He played non-stop and just bounced around on that bench.”

The next day, Hamilton arranged for David and Woody to have a private tour of the White House, and he met them in his Congressional office. “The thing I remember the most is he wore that burr haircut and a polyester leisure suit. I wasn’t expecting that from someone who held so much pull in Washington, but I guess I learned my lesson. Grandfather and Congressman Hamilton were really good friends.

“My best memory is how alive grandfather was during that trip. He was 22 or 23 years old for those three days because he was so chipper and full of life.”

When the Whites returned to town, the media was waiting. WAVE3 did an on-air interview with Woody in his Paoli home, where he sat back in a rocking chair “just as proud as a peacock,” David said.

“Woody was a character,” David said. “I think that’s why he was so successful. It was his personality.”

Stories like these resonate with JR and David as they recall musical memories that defined many moments in the White family. They create as much love as they do laughter. And they’re honored that the 75th Persimmon Festival will feature a nightly tribute to the man who gave them so many of those memories.

“I just wish Daddy was still here to see it,” JR said. “He thought the world of Mitchell. He really did. He talked about it all the time. I know he’d love to see that it has lasted all of these years and still continues to go strong.”