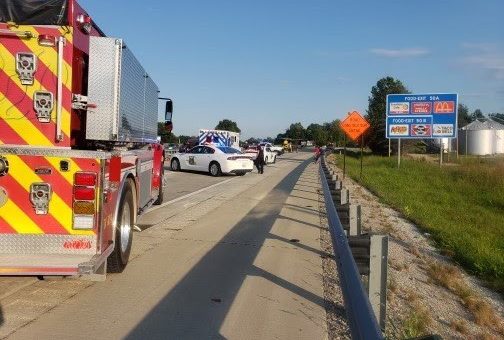 SEYMOUR – On Thursday, August 25, 2022, Troopers from the Indiana State Police-Versailles Post investigated a three-vehicle crash on I-65 in Jackson County.

A motorcyclist from Franklin County, Indiana was seriously injured and was flown by a medical helicopter to a Louisville, Kentucky hospital.

The initial investigation by the Indiana State Police-Versailles Post Crash Reconstruction Team indicates that, shortly after 5:30 pm, an Indiana State Trooper was patrolling on I-65 in southern Bartholomew County.  The trooper observed a motorcycle driving erratically south on I-65.

Due to the trooper not being in a position to catch up to the motorcycle, he radioed the information to other troopers in the area.

Trp. Clayton Saltzman was in the area and began observing the motorcycle.  He located the 2008 Aprilia motorcycle and attempted to conduct a traffic stop due to a registration violation and driving behavior, near the 52-mile marker, just north of Seymour.

Upon activating his lights, the motorcyclist, later identified as 26-year-old Robert Pettry, accelerated rapidly away from him.  Within seconds of Trp. Saltzman attempt to stop the motorcycle, Pettry attempted to pass a red 2012 Chevrolet Cruze, being driven by 32-year-old Marlee Rogers, of New Lothrop, Michigan, on the shoulder of the interstate.

Pettry’s vehicle collided with the left rear of Rogers’ vehicle.  As a result, Pettry was thrown from the motorcycle.

Pettry’s motorcycle continued to travel south where it was then struck by a third vehicle before catching fire.

Trp. Saltzman was on the scene very quickly and immediately provided medical attention which included applying multiple tourniquets due to traumatic injuries sustained by Pettry.  Trp. Saltzman’s actions controlled the bleeding until EMS arrived on the scene.

Pettry was airlifted to a hospital in Louisville, Kentucky for treatment of serious injuries.

The investigation is ongoing.  Toxicology tests are pending.

The southbound lanes of I-65 were closed for nearly three hours for crash investigation and cleanup.