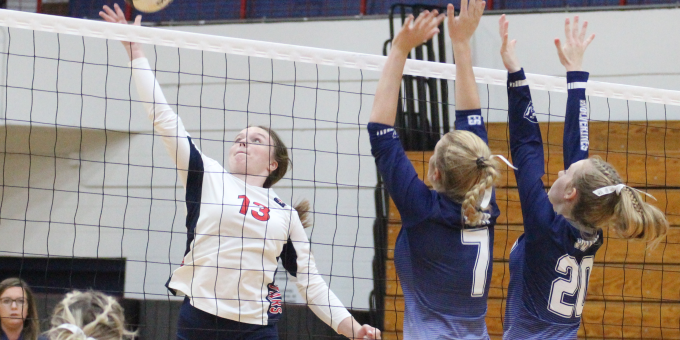 Whitney Carroll never envisioned her first victory as the head coach of Bedford North Lawrence’s program would take so long, but here she was. Nine matches into the season, and the pressure valve was about to blow off the top of the cooker. Finally, some relief.

After a sluggish and worrisome opening set, the Stars bounced back to conquer White River Valley in four on Monday night, rallying for an 18-25, 25-22, 25-19, 25-22 triumph. If anyone deserved one of those water-cooler celebration baths from their team following a conquest, Carroll certainly qualifies. Of course that would have made a mess on the hardwood court. She had to settle for fist bumps and hugs. And smiles, for a change.

With freshman hitter Sammie Gratzer making a huge impact at the net, with seniors Annie Waggoner and Hayley Davis serving huge points, with Cami Anderson slugging on the frontline and Cali Mansker setting the tone in the middle, the Stars (1-9) broke through. Which was greater, the thrill of victory or the relief of ending the slump? Probably equal.

“We finally got one under our belts, broke the seal,” Carroll said. “It felt good. A little bit of a relief because, for them, it’s finally real that they can win.”

When the Wolverines (4-5) claimed the first set – more because of BNL’s lackluster errors than WRV’s excellence – a sense of dread was settling. BNL had all the excitement level of the lobby at the BMV. That same old feeling again. The Stars needed a spark.

“It’s that mentality,” Carroll said. “We didn’t show up ready to fight. We just think we can go through the motions and get the job done. There’s no fire, I don’t see fire yet. We have moments of it, but it very quickly diminishes. That’s the frustrating thing. They can do it, I see it in them.”

The flame flickered to life in the second set as BNL rumbled to an 8-3 lead. When WRV pulled even, Mansker served back-to-back winners for a 21-15 edge. Gratzer thumped down a kill, Waggoner popped a kill and pushed down a winner to close out the set – BNL’s first winning block since the five-set setback at Bloomfield and only the fourth one it had posted this season.

Once they figured it out, the Stars duplicated it. Waggoner opened the third set with three straight aces, Gratzer had a kill and block during a 7-1 run in the middle of the set, and Mansker’s kill finished it off.

In the final set, BNL trailed 13-7 and 20-17 before coming back. Davis served the next six points, withWaggoner cracking a kill and adding another deep push to an unguarded corner, for a 24-20 advantage. Anderson’s spike was returned into the net for the clinching point.

Cue the celebration, the first since a win over Eastern Greene last season. Nobody would have blamed the small-but-faithful student “section” for rushing the court.

“It feels amazing,” Anderson said. “It’s good to get out there and win a game. We worked so hard during practices, so this is good. We just worked hard as a team instead of working as one single player. It really felt good. We know our coach has our backs. Her confidence in us brings our confidence in ourselves.”

And was the relief palpable? ”100 percent, yes,” Anderson answered.

Anderson finished with 9 kills, 6 digs and 2 aces. Davis totaled 19 digs and 5 kills, Gratzer smacked 9 kills and 4 blocks, Kendlyn Alvey added 11 digs, Mansker had 6 kills and 6 digs, Waggoner contributed 10 digs, 6 kills and 3 aces, and Harley Tanksley finished with 7 digs. Gratzer was the force up front that Carroll has been searching for.

“As a freshman, you’ll make mistakes,” Carroll said. “It’s just getting her comfortable, learning to not be lost when she makes a mistake, just recover and swing every time. Cali played a very solid game. She’s always even keel, her attitude and effort are always there. She might not crush it, but she will be a constant.

“They’re still not playing volleyball. We were slow all night, one step behind, a little sluggish. It feels good to get the win, but we can still play better.”

BNL will now seek to start a winning streak when it hosts Scottsburg on Tuesday.