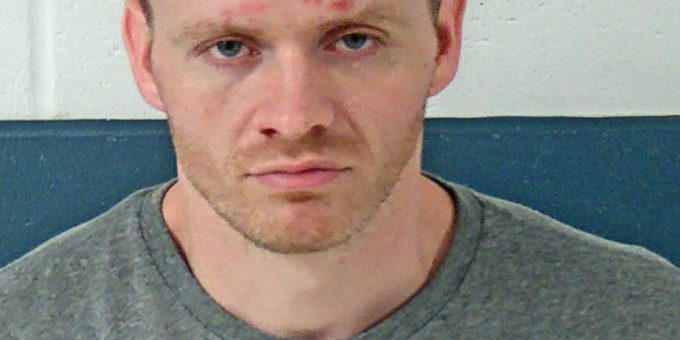 BEDFORD – A Bedford man was arrested when Bedford Police officers were called Tuesday to the 1210 block of 7th Street after a report of a fight in progress.

While en route to the call, the dispatcher reported a second caller said two shots had been fired and the caller witnessed a gray SUV traveling east through the alley.

When officers arrived they spoke to a male and female who had been walking down the sidewalk on 7th Street when they saw 35-year-old Andrew Endris behind the house. Endris then walked toward them and began yelling at one of the men.

According to the male, Endris pulled out a handgun and pointed it at one of the men. He then fired off a round into the ground. The male hid behind a fence and Endris fired another shot but the male said he didn’t think Endris was attempting to shoot him.

The male stated that he and Endris had been in altercations in the past. The male said Endris then left in a gray Saturn SUV with a blonde female driver.

An officer then located the vehicle and conducted a traffic stop at the intersection of 13th and J streets. While other officers were out at the traffic stop, two officers began checking the yard for evidence. They located a single divot in the ground which appeared to be struck by a bullet. A few feet further away, officers located one spent 9mm shell. They also located a knife holster near the deck of a home where the other male had been standing. That male told police he pulled it and threw it at Endris after he fired the gun and was driving away.

Officers located the knife on the other side of the alley where the male had thrown it, which was consistent with what the male had told officers.

The female told police she saw Endris and the male arguing but she did not see a weapon.

At the traffic stop, officers spoke to the female driver, and a female passenger and detained Endris who was in the back seat.

Both females told police that Endris had fired shots, but did not see where he was aiming.

The driver gave police consent to search the vehicle. Inside the vehicle, officers located two empty casings in the driver’s side floor board. The females both told police Endris had thrown the gun from the vehicle after the shooting.

Officers located that gun in the alley at 807 I Street. There was one round in the chamber and five in the magazine. The gun was made safe and packaged as evidence.

The females were both then released from the scene.

Endris told officers he went to the home armed with the gun because he and the two females went into the country to shoot the weapon.

After they returned to town, the male approached them at a gas station and acted as if he wanted to pick a fight.

Nothing physical took place at the station and they left.

Later on, he saw the male approaching with a padlock tied to a handkerchief. Endris recognized the padlock as the same padlock that the male had used to strike him two to three weeks earlier. He was under the impression the male was going to hit him with it once again. At that point, Endris pulled his gun and fired a shot into the ground. He never fired the gun directly at the male. He then got into the vehicle with the females and left the scene. He told police he threw the gun out of the window as they drove away.