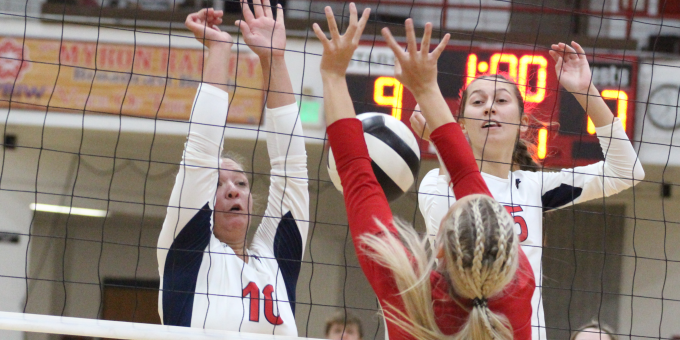 BEDFORD – Growing pains usually refer to the trial-by-fire experience a young team must suffer as it matures. Bedford North Lawrence is aching through those. That’s going to happen. At the same time, it would be nice if a couple of Stars had unexpected growth spurts. That’s not going to happen.

Edgewood’s Kaiden Harrington stands 6-foot-3, towering above BNL’s front line at the net. She was the big (pun intended) reason the Mustangs powered their way to a three-set sweep of the Stars on Monday night.

“They fight, they want to win,” BNL coach Whitney Carroll said. “I’m encouraged. Every game, they show me more than the last.”

Edgewood had other weapons, like 6-2 Gracie Farmer (six kills, four aces) and vertically-challenged Aida May (32 assists), like Olivia Edgeman (8 kills) and Alayna Flynn (13 digs). But the big difference was Harrington. The Stars had some success in blocking kill shots at the net, but the key points were usually decided by force.

”It’s definitely a lot easier to play with someone her size,” Edgewood coach Beth May said. “That’s a key to a lot of our wins.

“I thought BNL did a great job of defending in all aspects. Kudos to them. Their record doesn’t show the effort they put on the court. They weren’t just going to let us have the win.”

The Stars were forced to adjust on the fly when starting libero Kendlyn Alvery was sidelined with an illness in the middle of the first set. That mandated some rotation changes, and the Mustangs took advantage. BNL settled into rhythm to start the third set and played its best. Isabelle Harding thumped two wicked serves for points, Annie Waggoner dumped a push-kill into the deep corner, Hayley Davis found open floor with a tip shot, and Aly McKeaigg knocked down a kill for a 13-13 deadlock.

“Even with some changes, they rolled with the punches,” Carroll said. “We had to scramble and make fast changes and they stayed settled and kept a level head.

“They’re playing really hard. Things are starting to click for them. It’s awesome to see. They just don‘t have confidence in themselves. They see a loss and immediately feel defeated, but if we just make a few tweaks, we have that game. We had the momentum, we just make a few mistakes at the key moments that really matter.”

BNL will journey to Bloomfield on Tuesday.