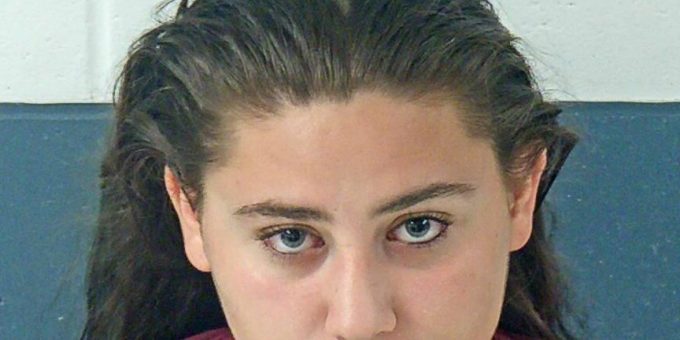 MITCHELL – An Orleans teen was arrested after Mitchell Police officers responded to a physical fight at the Dollar General store parking lot on Saturday at 9:35 p.m.

Central dispatch notified officers while en route that a female was hit in the head by a male with brass knuckles and her head was split open. An ambulance was requested to the scene.

When officers arrived they found a woman sitting beside a black SUV holding her head. As officers approached she began screaming at the officer and pointed to two individuals that had assaulted her. The male and female were standing just east of the store entrance.

Both the male and 19-year-old Brooklyn McNeely were detained.

Officers found a pair of brass knuckles in the male’s pocket.

McNeely told officers she and the male were standing outside of the building when the woman walked out and asked McNeely what she was looking at. McNeeley told police the woman started to approach her and raised her arms. That is when McNeeley began to hit the other woman. She told police the male was not involved.

The injured woman stated she was walking out of the Dollar General when she was followed by McNeely. She told police McNeely was attempting to instigate a fight. The injured woman told McNeely to leave her alone.

That is when McNeely allegedly pulled out the brass knuckles and hit her multiple times in the head and face while the male was recording the incident.

Police say the woman suffered swelling to the top of her head and was bleeding from her hand. The woman refused to be transported to the hospital but signed a battery affidavit.

The male told reported to the police he was dating McNeely and hid the brass knuckles in his pocket because he didn’t want her to get in trouble and he was going to tell police he was the one who hit the woman.

Officers later watched the fight on the video that the male had recorded.

McNeely was arrested on a charge of battery resulting in bodily injury.