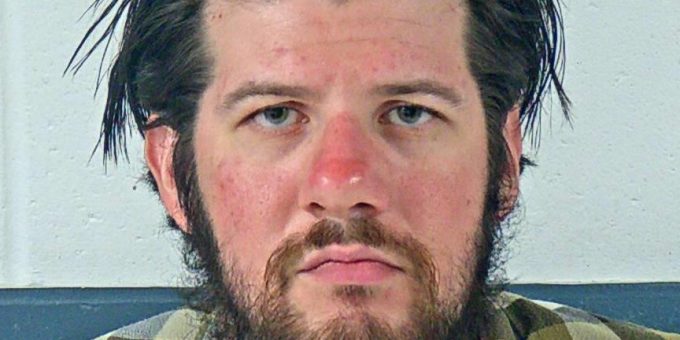 BEDFORD – A Spencer man was arrested after a Bedford Police officer was summoned to Taco Bell on Saturday after a report of an intoxicated male at the drive-through window.

The caller reported at 10:19 p.m. there was a bottle of alcohol in the front seat of the vehicle and they could smell the odor of alcohol coming from the vehicle.

Two Bedford Police officers arrived at the establishment and found the vehicle exiting the parking lot.

The driver turned south onto Clinic Drive and failed to come to a complete stop when turning west onto 16th Street.

An officer attempted to stop the vehicle. The driver, 29-year-old Ethan Adkins, of Spencer, failed to stop and continued to travel west on 16th Street.

Adkins then turned north onto Becky Skillman Way and traveled a short distance before stopping in a parking lot.

When the officers approached the vehicle they could detect the odor of alcohol coming from the driver and the vehicle.

Adkins would not exit the vehicle and he was told if he did not he would be “forcibly removed” from the vehicle.

The officer said Adkins “forcefully pulled his arm from me and braced his feet against the floor, pushing his body against the center console attempting to make space between him and me”.

Adkins was then transported to IU Health Bedford Hospital for a blood draw. His blood alcohol content was .180 percent.

According to police, Adkins has been arrested and convicted twice on a charge of operating a vehicle while intoxicated.

His vehicle was towed by Mikel’s Wrecker Service.