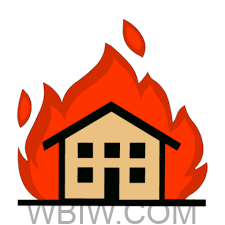 KENRAY LAKE – Firefighters from four volunteer fire departments responded to a house fire at 60 Lake Court at the intersection of South Kenray Lake Drive on Monday at 4:36 p.m.

Those responding could see the smoke bellowing from the home miles from the scene.

The home belonged to Tom and Penny Carroll.

The fire started on the front porch after someone lit a Citronella candle and caught other items on fire. The fire spread quickly to the home, according to Chief Brown.

REMC was also on the scene to disconnect the electricity from the home.

Firefighters were able to keep the fire from spreading to an attached garage. But the home was destroyed in the blaze.

Firefighters used hydrants and had to “draft water from the Kenray Lake” to extinguish the blaze.

Firefighters were on the scene for more than 4 hours leaving the scene at 8:50 p.m. to make sure all the hot spots were extinguished.