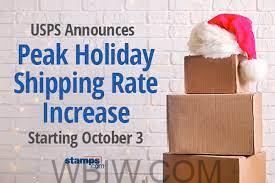 INDIANA – The U.S. Postal Service has an early holiday message for people planning to send gifts to friends and family later this year: Be prepared to pay more.

For the third year in a row, the United States Postal Service is temporarily hiking the prices of its delivery services during the peak holiday season.

The price increases, which will range from 25 cents to upwards of $6 per package, would go into effect on October 2 and last through January 22. The additional holiday shipping fees will be based on the weight of the package and the distance that it is traveling, the USPS said on Wednesday.

The USPS says the rate hike will “keep USPS competitive while providing the agency with the revenue to cover extra costs in anticipation of peak-season volume.”

In a statement, the postal service didn’t specify which extra costs it is anticipating, although the price of fuel and labor have risen considerably since a year earlier.

While the USPS said the price hikes are similar to previous years, the extra shipping costs could add to the financial pressures hitting many families’ budgets as inflation remains near a 40-year high, touching everything from gasoline to grocery costs.

The USPS said that it charges “some of the lowest mail postage rates in the industrialized world and continues to offer great values in shipping.” It added that international products “will not be affected by this seasonal adjustment.”

The USPS, in July, increased the price of first-class Forever stamps. The new price is 60 cents, up from 58 cents, which the USPS said is lower than the rate of inflation.

Postmaster General Louis DeJoy on Tuesday told the Postal Service Board of Governors that the USPS could lose up to $70 billion over the next decade. That’s significantly lower than USPS’ earlier projection of about $160 billion, but still signals that the service needs to “take immediate and substantial action,”