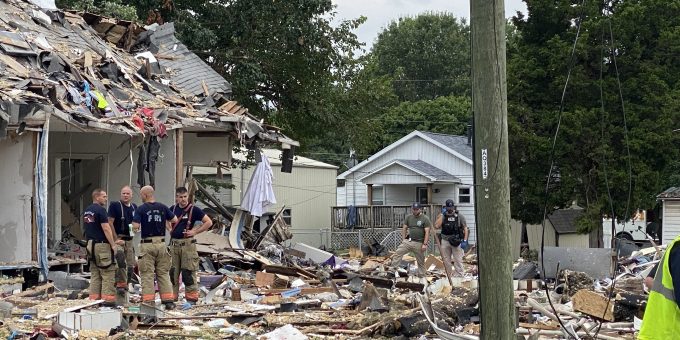 EVANSVILLE – Three people have died and at least 39 homes were damaged after an explosion in Evansville.

Fire Department Chief Mike Connelly said in a news conference on Wednesday, “There could be other victims, we have not completed our search. The buildings are not yet safe to enter.”

The initial survey shows that 39 houses have suffered “severe to minor damage,” the chief added.

The chief later told reporters that 11 of those 39 homes were left inhabitable, adding that the American Red Cross will be helping those affected families.

In a post on Twitter, Mayor Lloyd Winnecke shared photos from the scene showing destroyed and damaged homes and piles of debris and said first responders and local departments will “keep residents in the Willemette Village/Wesselman Park neighborhoods safe and informed.

“The mayor told CNN affiliate WFIE that the scene was “devastating” and that it will likely take a while to figure out what happened.”I’d seen photos that have been placed online, but once I walked up to the residence itself and saw the devastation with my own eyes, it was, I mean, it was a gut punch,” Winnecke said.”Across the street from the explosion you’ll see house after house that has windows blown out, that has you know there’s insulation blown out from homes.

A structural collapse team was called in to survey buildings and to make sure that all gas and electric circuits “had integrity,” the chief said

.At least eight agencies were on the scene, including the Bureau of Alcohol, Tobacco, Firearms, and Explosives and the State Fire Marshal.

“They will resume the investigation in the morning,” the chief said at a news conference Wednesday evening. “This is a standard operating procedure for an incident of this magnitude and of this type.”Search and rescue teams will be allowed back into the area once utilities are secured and the ATF determines their part of the investigation is over, Connelly said.

Authorities also asked residents to stay away from the area.

An investigation of the incident and what caused the explosion is underway, Connelly added.