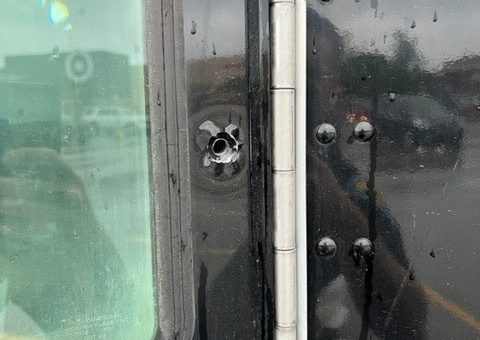 LAKE CO. – On Monday at approximately 2:52 p.m., Indiana State Troopers were dispatched of shots being fired on I-80 in the eastbound lane of traffic at the 0.1 mile-marker. This is 1/10 mile east of the Illinois/Indiana state line.

The caller, a truck driver, reported a small gray passenger car with Illinois license plates had shot at his truck for no apparent reason.

Trooper Landowski arrived at the scene and discovered that there were two bullet holes in the truck. Further investigation showed that one of the bullets entered the cab of the truck near the driver’s legs. The bullet continued into the truck striking the cup holder and then a Mountain Dew can.

The bullet was able to be recovered.

The driver was not injured.

Anyone with any information on the suspect or suspect vehicle, a gray Nissan with Illinois license plates, is encouraged to contact Trooper Landowski at 219-696-6242. Callers can remain anonymous.