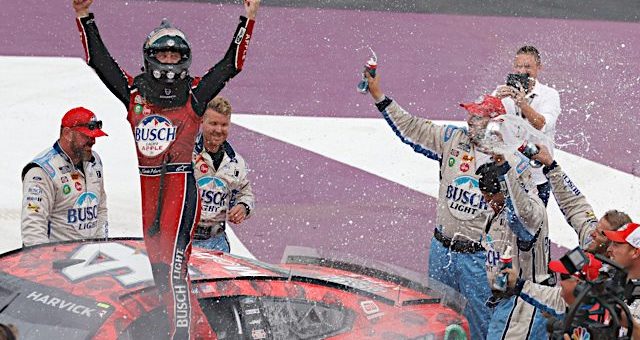 BROOKLYN, MI. – After nearly two years of not being in the winner’s circle Kevin Harvick of Stewart-Haas Racing took the checkered flag on Sunday at theFireKeepers Casion 400.

As other front-runners fell by the wayside late, a clutch restart performance from the 46-year-old with just 34 laps remaining let him open up a massive gap on the battle for second, and Harvick cruised his way to his sixth Michigan victory.

Harvick, who drove the red Busch Light Apple No. 4 Ford for Stewart-Haas Racing, outpaced pole-sitter Bubba Wallace by 2.903 seconds for the win. He caught a break with about five laps to go after race officials decided not to wave a caution flag when Daniel Suarez blew a tire.

It had been 65 races since Harvick’s last win, which came at the Bass Pro Shops/NRA Night Race at Bristol back on Sept. 19, 2020 when he held off Kyle Busch to claim the win.

“Everyone who doubted us, doesn’t know us. They obviously know we thrive in these types of situations. A lot of things went our way today, which we hadn’t had all year long,” Harvick said, adding the biggest thing for him was to take advantage of the pits and restarts.

In his fourth consecutive top-10 finish and third top five in the last four races. Denny Hamlin recovered from a late pit penalty to third, with Team Penske teammates Joey Logano and Ryan Blaney completing the top five. Despite a sixth-place run, Martin Truex Jr. suddenly finds himself on the outside of the playoffs, while Kyle Larson, Erik Jones and Alex Bowman in seventh, eighth and ninth were the only Chevrolets in the top 10.

“Just good timing for sure,” saidl Kevin Harvick, driver of the No. 4 Busch Light Apple #BuschelOfBusch Ford Mustang. “We’ve had several good runs the last few weeks – Loudon and Pocono where the car ran good and just didn’t have everything work out. I’m just really proud of everybody on our Busch Light Apple Ford Mustang. They’ve been digging all year long trying to make these Mustangs run faster. Our guys have done a good job in trying to take what we have, maximize it and do the things that we need to do. I’m just really proud of everybody at Stewart-Haas Racing. Everybody who doubted us doesn’t know us. They obviously know we thrive in these types of situations and a lot of things went our way today, which we haven’t had all year long. There at the end, we pitted and didn’t go a lap down and then the caution came out and got control of the race. That’s the thing I struggled with most today was traffic and restarts and just having to make up ground, but once I got clear track, that baby was hunting.”

There were seven caution periods for a total of 36 laps. Twenty-two of the 37 drivers in the FireKeepers Casino 400 finished on the lead lap.

Chase Elliott remains the championship leader after Michigan with a 119-point advantage over second-place Ryan Blaney.

“We don’t really know what started all of that. I mean, we blew three left-front tires in probably a matter of 20 laps, so I don’t know what happened and why they kept blowing. It just seems like that’s the way our year has gone. We can’t seem to catch a break in most of these races. I don’t know. It just sucks to have another day end short, but we’ll move on to the next one,” said Cole Custer, driver of the No. 41 HaasTooling.com Ford Mustang.

“I got hit in the left rear and spun out and then we all crashed. We just can’t seem to catch a break. I think some of the guys that were slower cars stayed out and that kind of jumbled up the field and then everybody swarms them and they can’t get out of the way,” said Aric Almirola, driver of the No. 10 Smithfield Ford Mustang.

SHR scored its maiden Michigan win via former driver Kurt Busch in June 2015, and former driver Clint Bowyer earned the team’s second win at the 2-mile oval in June 2018. Harvick’s first victory at the track came in August 2018 before he went on a run of three straight wins, returning to victory lane in August 2019 before sweeping the track’s doubleheader in 2020

This was SHR’s 32nd NASCAR Cup Series victory with Ford. Busch won the 2017 Daytona 500 to deliver the organization’s first win with Ford.

Harvick has now won 24 NASCAR Cup Series races with Ford. He is one of only 13 drivers to win 20 or more races with the manufacturer. He is tied with Matt Kenseth for 10th all time.

Harvick now has 16 top-five and 22 top-10 finishes at Michigan, the most among active NASCAR Cup Series drivers at Michigan.

Harvick finished eighth in Stage 1 to earn three bonus points. Harvick led once for 38 laps to increase his laps led total at Michigan to 737, the most among all active drivers. He has now led 11,407 laps since joining SHR in 2014. He has led 15,833 laps in his entire NASCAR Cup Series career.

Briscoe finished 10th in Stage 1 to earn a bonus point.

“Our Rush Truck Centers/Cummins Ford Mustang was really good to start the race. We were able to make some good gains but we were so tight. The guys did a great job working on it, but I got in the wall toward the end and didn’t help. We’re still in a good place, just got to get through the next few races and make sure we get to move on to the playoffs,” said Chase Briscoe, driver of the No. 14 Rush Truck Centers / Cummins Ford Mustang.

Next Up:
The next event on the NASCAR Cup Series schedule is the Federated Auto Parts 400 on Sunday, Aug. 14 at Richmond (Va.) Raceway. The race begins at 3 p.m. EDT with live coverage provided by USA and SiriusXM NASCAR Radio.