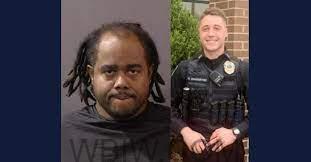 WASHINGTON – Following the tragic murder of an Elwood police officer by a career criminal who had previously shot at police, Senator Mike Braun is restating his support for strengthening penalties for criminals who target police. Senator Braun has been an original cosponsor of the Thin Blue Line Act since his first year in office.

Carl Boards II, who shot and killed an Elwood police officer on Sunday, had previously been convicted of criminal recklessness (and other lesser charges) after shooting at Indianapolis police during a pursuit in 2006, striking the police cruiser multiple times. Boards was sentenced to 25 years in prison but was released after 13 years.

The Thin Blue Line Act makes the targeting, killing, or attempted killing of a police officer an aggravating factor in favor of maximum sentences. Currently, this only applies to federal law enforcement; the Thin Blue Line Act would apply this to local and state police as well.

“The career criminal who killed an Elwood officer also tried to kill Indy cops 16 years ago and should have paid a stiffer price. If you try to kill a police officer, you should pay the highest price possible. I support making the targeting of police in a violent crime an aggravating factor in favor of the harshest penalties available,” said Senator Mike Braun