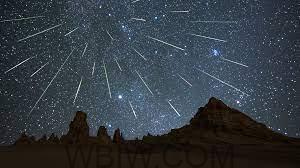 INDIANA – The Perseid meteor shower, one of the most anticipated and popular night-sky shows of the year, is likely to be upstaged by August’s full moon.

The Perseids are one of the strongest meteor showers occurring annually between July 14 and Sept. 1. This year, the meteor shower will peak on August 12th and 13th, which just so happens to conflict with the full moon, whose bright light will make it difficult to see the meteors shooting across the night sky.

Bill Cooke, a NASA astronomer who leads the Meteoroid Environment Office at the space agency’s Marshall Space Flight Center in Huntsville, Alabama, said, “Most of us in North America would normally see 50 or 60 meteors per hour, but this year, during the normal peak, the full Moon will reduce that to 10-20 per hour at best.”

The August full moon, also known as the Sturgeon Moon, will be at its brightest on August 11th at 9:35 p.m. EDT (0101 GMT) and will appear nearly full the night before and the night after its peak. It is the last of this year’s supermoons, which occur when the full moon coincides with the moon’s closest approach to Earth in its orbit. This means the Sturgeon Moon will appear just a little brighter than a normal full moon.

The Perseids are caused by Earth passing through the debris remnants, or bits of ice and rock, left behind by Comet Swift-Tuttle, which last passed close to Earth in 1992. Comet Swift-Tuttle orbits our sun every 133 years and won’t pass our way again until 2125.

The Perseids will begin to slow down around August 21st and August 22nd and cease completely by September 1st, with a few “shooting stars” on the days leading up to or after August 12th.

To view, the event you need to find a dark viewing spot away from artificial light between midnight and dawn for the best meteor-gazing opportunity. If you miss out on spotting the Perseids, there are still a few chances to catch other meteor showers later in August, when the moon’s light won’t interfere quite as much.