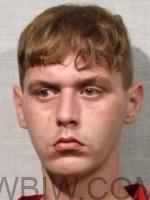 The crimes began about two weeks ago.

According to police, officers investigated four burglaries between June 29th and July 14th, at two doctor’s offices, both on Medical Place. Police estimate thefts and damages at more than $10,000 including equipment that was taken and damage done to the buildings.

Police believed Allman, of Seymour, was involved and secured a search warrant for his home in the 300 block of Haag Avenue on Thursday.

There they found meth, marijuana, and drug paraphernalia.