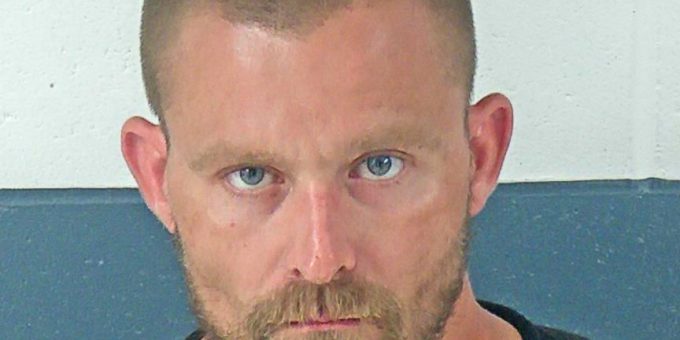 In this case, 40-year-old Charles A. Baker and the child’s mother were brought to visit their 11-month-old son who is in the custody of one of Baker’s relatives.

The caseworker reported Baker became angry and was shoving the child’s mother and Baker was out of control.

When police arrived at the home, they spoke to the caseworker who reported Baker was trying to leave and it’s a mess”.  Baker and the child’s mother got into an argument, and Baker was “getting in the woman’s face and knocked her into a table and shoved the woman out of the house screaming and yelling and he threw the baby’s highchair tray”.

Police asked where Baker was and the caseworker reported Baker was leaving and getting into a blue car parked in front of the home.

Police found Baker in the car on the passenger side. He was told to get out of the vehicle and was detained. Baker refused to answer any of the officer’s questions.

The woman told police Baker “did not put his hands on me”, the officer said, “if he shoved you that’s battery” and she stated “he did not shove her”.

The caseworker told police the argument started after the child’s mother dropped Baker’s container of food on the floor and Baker “lost it”.

The caseworker told police Baker then went to put the child in the high chair and threw the highchair tray. The caseworker told Baker to put the baby down trying to deescalate the situation. She then took the baby from Baker and said she was leaving with the baby which caused Baker to start screaming and yelling and “that is when he pushed the child’s mother onto the table and was yelling at her”.

The caseworker told police Baker had his body up against the woman and was shoving her out the sliding door. Some other males at the home then escorted Baker out of the home.

Baker was then told he was going to be arrested on a charge of domestic battery in the presence of a child. Baker began screaming and cursing at the caseworker. He was told to calm down but would not stop. He was then charged with disorderly conduct and transported to the Lawrence County Jail.