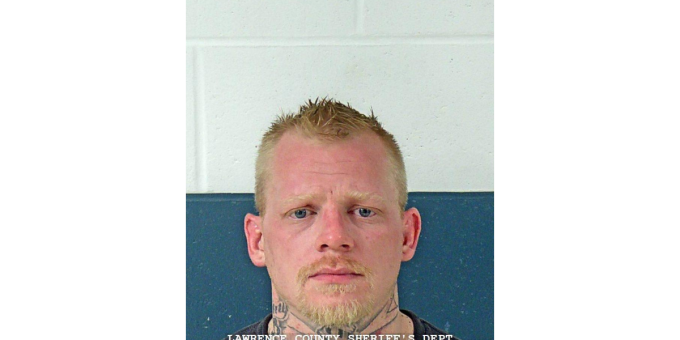 BEDFORD – A Bedford man was arrested Tuesday after Lawrence County Sheriff’s Department deputies responded to a 911 call hang up at 8:28 p.m. at 85 Middle Avenue.

While en route to the home the dispatcher reported they had received a second call saying there was a physical altercation between a woman and a male at the home.

Officers arrived and spoke to the woman involved while others continued to look for 35-year-old Ryan McGaha. Police were unable to locate him.

The injured woman suffered red marks on the left side of her neck. She was asked how she was injured and the woman replied “I am not sure”.

After getting away from McGaha, she told him she was going to call the police. That is when McGaha left the home. The woman told police she didn’t want McGaha to go to jail because “he’s not like this unless he’s drinking”.

The woman told police she and McGaha were arguing about purchasing more alcoholic beverages. She said McGaha “is an alcoholic and has been through rehab for alcohol”. She said McGaha had gone to the liquor store and got alcohol and had been drinking. After going into the house McGaha began screaming at her so she went into the bedroom to ignore him.

That made McGaha really angry.

She told police she got up to get the laundry and that is when McGaha spits in her face. He then said he was done and was leaving and threw his backpack at the television breaking it.

She told the police he continued to drink and she told him “ you can’t go to work drunk like this”.

He then got in her face and was screaming and spitting in her face. The woman asked him to stop and that is when McGaha pushed her down onto the bed. She then told police she “dug her fingernails into Ryan to try and get him off of her”. Once he got off she ran to the other side of the room and called 911. McGaha then threw his phone at her, hitting her in the head.

Officer Compton said there was a bump on the right side of her head.

Other officers at the scene could hear the neighbor’s dogs barking and saw a male walking west through the trees at a home behind the residence. Officers investigated and found McGaha walking out from behind the other home. He was then detained on a charge of domestic battery.

McGaha told police that he and the woman had gotten into an argument but nothing physical had happened. He told the police, he was just trying to leave but didn’t have anywhere to go.