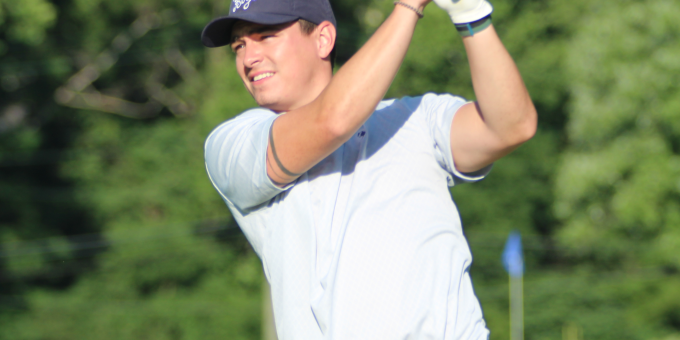 BEDFORD – Three birdies in a row, defined by golf lingo and probably stolen from bowling terminology, is called a “turkey.” Founding father Benjamin Franklin, who lobbied to make that fowl the national bird before it became the symbol of Thanksgiving, would have approved. Trey Turner was thankful for his feathered streak.

Turner is no turkey, he’s the defending champion in the Bedford Men’s City Tournament, and he played like it during Sunday’s second round, closing the perfect Chamber of Commerce day with a birdie run that vaulted him back into the lead as the event reached its midpoint.

Turner carded three straight birdies on the finishing holes, completing a 3-under 69 as he finished 36 holes at 1-over 145, taking a two-shot lead over late entrant Koby Robb. Turner will continue the chase for his third City championship when the event concludes next weekend at Otis Park.

After opening with a water-logged 76 during the rain-drenched opening round, Turner’s putter blazed to burn off any moisture and drained away a lot of excess shots. Perhaps he made a pact with that Scotty Cameron weapon, or demanded an apology, but that club was the key as he buried a 3-footer on 16, a 12-footer on 17 and a 15-footer on 18 to gobble up the deficit he faced to start the day.

“I hit the ball well, honestly, both days,” Turner said. “It was just getting the putter going. I felt like I wasn’t making a lot of putts, it took a while to get it going. That was what was missing.”

Indeed, his stroke was not consistently pure until the hot-flash finish. He missed an eight-inch par tap on the third hole, for goodness sake. He did birdie the fifth and sixth, but he three-putted for bogey on 13. Finally, with clutch par saves on 14 and 15, something clicked. Probably something as simple as confidence.

“I’m feeling a lot better about the putter,” Turner said. “It would be nice to turn around and play again.”

Robb feels like one of those PGA Tour alternates who gets thrust into the field when a qualified entrant withdraws. He got his weekend mixed up, thought the tournament started on July 16, and was stunned when the first-round tee times were released without his name to be found. After a quick phone call to tournament director John Bertges, he was granted a late spot – if someone didn’t show up. When an absence opened a slot, Robb made the most of it. After a first-day 77, he fired a scorching 2-under 70 to climb the leaderboard.

His highlight came on the par-5 fifth hole, when he crammed home a 20-footer for eagle. Normally an old-school putter who removes the flagstick when putting, he spur-of-the-moment decided to leave the stick in place and promptly banked it home.

“For some reason it felt like the thing to do,” Robb said. He followed that with a birdie on 6 to play the opening stretch in 4-under, then briefly slipped back with three bogeys over the next five holes. But he regrouped to play the last seven in 1-under, with a birdie on 17.

“I’ve hit the ball really well both days,” Robb said. “I’ve been hitting the ball longer the last couple of months, and my putter was working today. I’m kind of excited. I haven’t had time to practice much, so hopefully I can sharpen my short game the next few days.”

Jansen Perdue settled into third place at 148 (rounds of 76-72). First-round leader Sam Cobb (72-77) and recent Bedford North Lawrence graduate Trevin Hutchinson (78-71) were locked at 149, and Hutchinson had the other red-number round (including his own “turkey” with a birdie binge on holes 4-6). The cut for the championship flight came at 158.

Many factors can change during the work-days break between the second and third rounds. Turner has been through the lull before.

“It’s a little different because of the five-day break, we get to sleep on that for a while,” he said. “I just need to keep my confidence up, especially with the putter. I just have to play my game. You’re playing against the golf course, especially on Saturday. If adjustments need to be made, that will happen.

“As a competitor, it doesn’t matter what I’m doing, I want to win. Being the defending champion, you want to show what you can do. Coming out with 76 wasn’t the prettiest thing in the world, but it happens. It was nice to follow that up.”