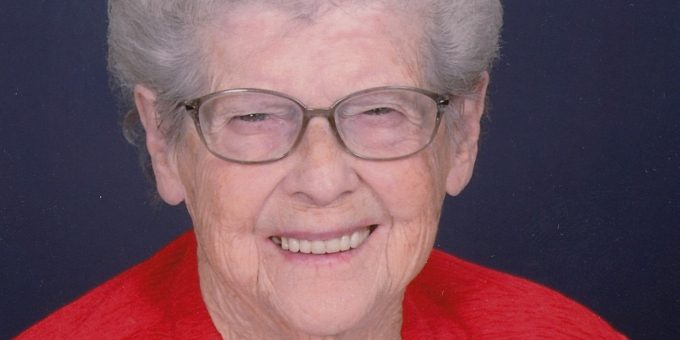 Hulda L. Goecker, 99, of Seymour passed away on Tuesday, July 5, 2022, at The Lutheran Community Home surrounded by her loving family.

She was born in Dudleytown on August 31, 1922, to the late William and Anna Wehrkamp Bobb. She was baptized, confirmed, and later married at Emanuel Lutheran Church, Dudleytown. On October 5, 1941, she married Earl A. Goecker. Their marriage was blessed with four children. She and her husband, Earl, were co-owners of Goecker Building Supplies and Goecker Construction. Hulda had a strong work ethic throughout her life. She worked at various jobs outside the home after her youngest started school. Then, after raising her family and seeing them leave home, she became an owner-operator of Hulda’s Café and Hulda’s Gift Shop. She put her heart and soul into any job she did and did it well.

Upon retirement, Hulda and her husband spent many winters at their home in Kissimmee, FL. She took great delight in meeting the public, spending time with family and friends, doing volunteer work at the hospital, and eating out. The family has fond memories of Hulda’s peanut butter and coconut cream pies and her generous distribution of cookie tins and pumpkin bread at Christmas. Hulda was a member of Immanuel Lutheran Church, Seymour, since 1948.

She loved reading the Bible, and faithfully attended worship services. Nightly, she would pray for every family member in chronological order by memory.

She was preceded in death by her husband, Earl; brothers: Henry Bobb, Eldor Bobb, and Lawrence Bobb, her sister, Leona Trimpe, and twin sister, Hilda Vehslage.

The funeral service for Hulda will be conducted by the Reverends Ralph Blomenberg, Philip E.Bloch, & James A. Rodriquez, Jr., and Vicar Nick Wagenknecht on Saturday, July 9, 2022, at 11:00 a.m. at Immanuel Lutheran Church. Burial will take place at Immanuel Lutheran Cemetery. Visitation will be held on Friday, July 8, 2022, from 3:00 p.m. until 8:00 p.m. at the Burkholder Funeral Chapel of Thorne-George Family Funeral Homes in Seymour and on Saturday from 10:00 a.m. until the time of service at the church.

Burkholder Chapel of Thorne-George Family Funeral Homes has been entrusted with the arrangements for Mrs. Goecker and condolences and memories may be shared at www.burkholderfuneralchapel.com.