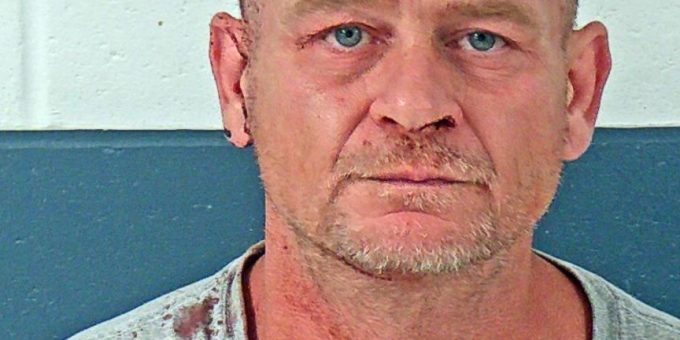 BEDFORD – A Bedford man was arrested when Bedford Police officers were requested to Cambridge Square on Monday, July 4th after a report of a domestic fight.

A child reported his father had hit him. The boy said he had been riding his bike and when he got home his father had been drinking. The teen asked to go to the fireworks and his father got upset and started hitting him.

The boy said 48-year-old  Robert Thomas had punched him in the left side of the head which caused pain and there was observed swelling behind his left ear and had kneed him in the forehead which was also swollen.

After leaving the apartment and traveling onto Plaza Drive, Thomas began hitting his head off of the divider in between the front and back seats of the police car and the side window partitions.

The officer stopped his vehicle and opened the back door to get control of Thomas and prevent him from further hurting himself. That is when Thomas kicked the Officer in the chest.

Thomas was removed from the car and an ambulance was called to the scene because Thomas was bleeding profusely from lacerations on his head from striking the divider. After being treated, Thomas was transported to IU Health Hospital for stitches and was released and transported to jail on charges of domestic battery, domestic battery in the presence of a child, and battery of a public safety officer.