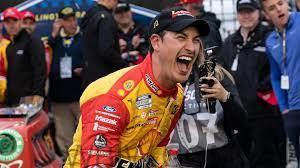 MADISON, IL. – Joey Logano took the lead from Kyle Busch in overtime for the white flag and cruised to the victory Sunday in the Enjoy Illinois 300, the NASCAR Cup Series debut at World Wide Technology Raceway. His margin over second-place Kyle Busch was .655 of a second.

The Race extended five laps past its scheduled 240-lap distance due to a green-white-checkered finish.

This was Ford’s 715th all-time NASCAR Cup Series victory and its fourth this season.

There were 10 caution periods for a total of 53 laps. All but five of the 36 drivers in the race finished on the lead lap.

Almirola earned his second top-five and his fifth top-10 of the season.

Almirola’s fifth-place drive equaled his best result so far this season. He finished fifth in the season-opening Daytona 500.

“It was a solid day for us. We really needed that. It kind of turned the last month around. We’ve been running top-10 and finishing 20th or worse the last month-and-a-half. Really proud of the effort today. It was kind of a mistake-free day and ran inside the top five all day. Drew (Blickensderfer, crew chief) and the guys on the team did a great job. We were just so close to having what we needed to go challenge those guys for the lead,” said Aric Almirola, driver of the No. 10 Built Ford Proud Ford Mustang

Briscoe led the field to green by scoring the pole for the inaugural Enjoy Illinois 300. It was Briscoe’s first NASCAR Cup Series pole and it came in his 51st career start. It was the 56th Cup Series pole for SHR and its 71st overall.

Briscoe led the first 27 laps before a flat left-rear tire sent him to the pits for an unscheduled stop.

Harvick successfully defended that triumph a year later when he took his third win of a five-win season that culminated with the championship. In Harvick’s third and final Truck Series start in 2010, he won the pole and dominated, leading 143 of the race’s 160 laps en route to his ninth career Truck Series victory.

Briscoe made one NASCAR Camping World Truck Series start at Gateway in 2017. He won the pole and led twice for a race-high 88 laps before finishing second.

Chase Elliott remains the championship leader after Gateway with a nine-point advantage over second-place Kyle Busch.

The next event on the NASCAR Cup Series schedule is the Save Mart 350k on Sunday, June 12 at Sonoma (Calif.) Raceway. The race starts at 4 p.m. EDT with live coverage provided by FS1 and SiriusXM NASCAR Radio.