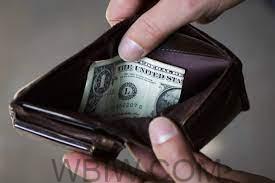 INDIANA – A report by the Brookings Institution found that, despite data showing that income levels are up, real estate and stock market prices have risen and credit card debt has decreased, Americans don’t feel better off.

And as has now been widely reported, much of this sentiment is due to inflation. Currently the highest it’s been in over forty years since 1981, the inflation rate accelerated to 8.5% earlier this year. Monthly expenses, such as gas prices; groceries, and household products have increased in price, costing the average household an additional almost $300 per month.

CouponBirds.com, a provider of consumer information to do with real-time deals and savings, surveyed 3,012 workers to determine exactly how many days after payday they spend their monthly budget. The in-depth survey uncovered that the average Hoosier said they blow through their budget just 11 days after payday, leaving them either financially strapped or having to dip into savings to get them through the rest of the month. This compares to a national average of 14 days.

When these figures were analyzed across states, those in New Mexico appeared to be the quickest spenders of their paychecks, with the average New Mexican having said that they begin running out of money just 8 days post-payday. Comparatively, those in Maine and North Dakota seem to have nailed their saving habits, with the average respondent here having said that they run out of cash 28days after payday.

CouponBirds also analyzed their own data across each state, investigating the changes in the number of online searches done with coupon-related queries from 2021 until the present. Coupons can offer great money-saving incentives when it comes to shopping for everyday products.

This showed that the number of search queries to do with coupons has indeed increased in the first quarter of 2022, as compared to 2021. In Indiana, there was a 15% increase in queries for ‘coupons’ or ‘promo codes’ between 2021 and 2022. When these changes were further analyzed, it was discovered that the state in the #1 position with the greatest increase in search queries to do with ‘coupons’ or ‘promo codes’ was Vermont. The analysis revealed a 24% increase in these queries in the Green Mountain State in 2022, as compared to 2021.

The survey also asked respondents: hypothetically, if they lost their current job, how many months could they rely purely on savings. On average, people said they could rely on their financial savings for only 2 months before these deplete. It was also discovered that 1 in 3 (34%)respondents said they tend to run out of money before payday, resulting in having to rely on savings or credit.

It has been well established through a number of studies that there is a strong link between that financial worries and mental health problems, such as anxiety and depression. In fact, more than half (62%)of people questioned in the survey said that aid inflation concerns negatively affect their mental health. Additionally, it was found that almost 1 in 4admit they avoid checking their bank statement for fear of seeing it overdrawn.

Lastly, 45%of people said due to inflation, there are certain things they bought this last year, that they can no longer afford this year.

‘It’s no surprise Americans are looking for various ways to save money when it comes to everyday expenses, such as groceries and household products,’ said Tricia Smith at Coupon Birds. ‘Staying up-to-date with real-time deals and savings can help people pocket extra dollars each month, which can contribute positively towards financial savings in general.’