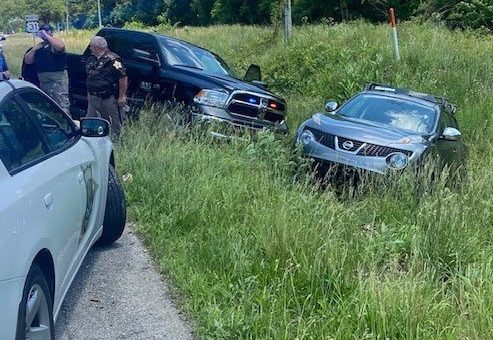 CLARK CO.  – Monday, May 30, 2022: A Memorial Day pursuit ended with the arrest of an Arkansas man after he first evaded arrest and fled on foot before eventually stealing a car and leading officers on a chase.

Just before noon on Memorial Day, Trooper Tyler Line from the Indiana State Police Jasper District was northbound on I-65 in Clark County when he observed a man walking away from his disabled car near the northbound rest park. After attending a Memorial Day event, Trooper Line was in plain clothes but was in his fully marked police car. Trooper Line stopped to assist the motorist and identified the man as Mario Rodriguez, 34, of Arkansas. Rodriguez was also the owner of the disabled vehicle. As both men talked on the side of the interstate, Rodriquez abruptly fled on foot into the nearby rest area at the 22-mile-marker. After trying several vehicles, Mario Rodriquez got into an unlocked car but exited when Trooper Line caught up to him and attempted to take him into custody. Rodriquez then broke free from Trooper Line as Line attempted to handcuff him and fled again into a wooded area on the east side of the interstate.

Within a few minutes, a property owner called 911 and said a man matching Rodriquez’s description was sitting on his back porch after the homeowner witnessed him swimming across the lake on his property located along U.S. 31. Sergeant Matt Marshall from the Sellersburg post soon arrived; however, Mario Rodriquez was able to avoid apprehension a second time and fled into the woods. As other officers arrived and began a K9 track, Clark County Dispatch advised Rodriquez had just stolen a Silver Nissan Juke belonging to a nearby resident.

A short time later, a Scott County Deputy spotted the car headed eastbound on Beagle Club Road towards U.S. 31. Officers from the Indiana State Police, the Clark County Sheriff’s Department, and the Austin Police Department soon joined to assist as Mario Rodriquez continued to flee. The Nissan eventually struck stop sticks deployed by the Scott County Sheriff’s department before making its way onto U.S. 31 southbound. Even though two of the tires were deflating, Rodriquez continued to drive at excessive speeds and veered towards oncoming traffic. Senior Trooper Mark LaMaster from the Sellersburg Post then completed a PIT (Pursuit Intervention Technique) Maneuver on the fleeing car and brought the Nissan to a stop on the side of the roadway.

Mario Rodriquez was remanded into the custody of the Clark County Jail without further incident.