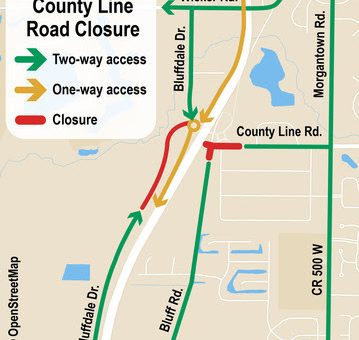 INDIANAPOLIS – The first new portion of I-69 in Marion County is expected to open for southbound traffic before the morning commute on Wednesday, June 1. The opening will kick off a series of temporary and permanent traffic pattern changes to advance the construction of the limited-access interstate.

Starting after 9 p.m. tonight, southbound State Road 37 traffic is expected to shift to the elevated pavement and bridges between Southport Road and Fairview Road in Johnson County. Southbound traffic will not stop for traffic signals at Wicker Road and County Line Road.

New southbound S.R. 37 entrance and exit ramps at County Line Road will open to a large roundabout west of the new highway.

Northbound S.R. 37 traffic is expected to shift to the new lanes about a week later. Two-way S.R. 37 traffic will be divided by temporary barriers during the construction of the new I-69 northbound lanes.

The new I-69 interchange is realigning County Line Road slightly north to minimize traffic impacts during construction. As each direction of S.R. 37 shifts to the elevated pavement and bridges, access to County Line Road and its nearby intersection with Bluff Road will close temporarily for about two months.

County Line Road is one of many areas along existing S.R. 37 and I-465 that will be affected by changing traffic patterns for I-69 Finish Line construction.

To help plan safe summer travels, the project website offers a graphical map that can be printed or an interactive Traffic Access Map. The maps put localized traffic patterns into context of other local roads and the larger I-69 Finish Line project.