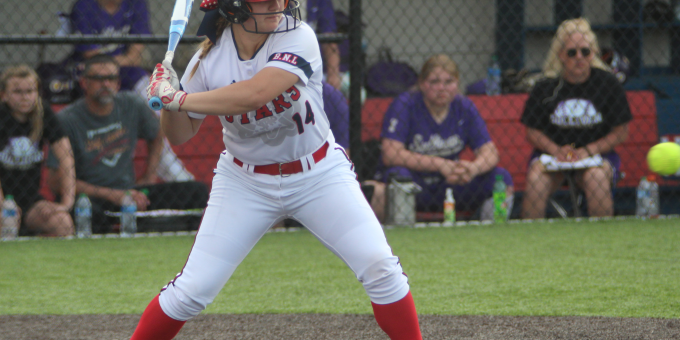 BEDFORD – One of the famous baseball cliches – and there are many – is the term “a bloop and a blast.” That means a rally can happen with the smallest of sparks, an innocent incident followed by an electric shock. Bedford North Lawrence refined that phrase just a bit. The Stars rallied with a walk and whack.

Trailing 2-1 in the fourth, with two outs and not many prospects, Class 4A No.4 BNL sent shock waves across the ballpark with a bolt off the bat of Carsyn Alvey, a bomb that powered the Stars to a tense 5-2 victory over Class 2A No.3 Sullivan on Thursday.

Alvey’s blast, her third straight game with a home run, followed a walk to Carlee Kern and erased the deficit. BNL added two huge insurance runs in the fifth on a loud double by freshman Ava Ratliff, propelling the Stars (21-2) into a huge weekend of battles with Edgewood and 4A No.1 Roncalli.

The Arrows (20-4) almost hit the bull’s-eye, looking to avenge an earlier loss to the Stars (6-4 during the tournament at Terre Haute on April 9). Sullivan, which had won its last six by a combined score of 85-5, took a 1-0 lead when Avery Wiltermood crushed the first pitch of the game for a homer to left center. The Arrows later reclaimed the lead when the Stars failed to communicate on a short fly ball to right, setting up the second run.

Then came Carsyn. After Kern drew the two-out walk against Sullivan left-hander Kate Ridgway, Avery crouched into a semi-bunt stance, setting her timing mechanism for the pitch. On a 3-1 count, she timed it perfectly, rocketing a drive to center for the go-ahead runs.

“I heard someone say ‘She fakes a bunt then hits a home run,’” BNL coach Brad Gilbert said. “That’s our timing thing. It was nice to see her square one up, and it was a good time to do it.”

The Stars added two more in the fifth. With one out, Lauryn Anderson singled to center, Annie Waggoner smacked a double to center, and Ratliff ripped her double (only her second extra-base hit in the last four games) to left-center to chase home both teammates as she raised her season RBI total to 45 (second in the state).

“I think she’s been pressing,” Gilbert said. “Teams aren’t pitching to her, making her chase a little bit. It was nice to see her relax. Those were big runs. We could take a little more of a breath.”

BNL’s first run came in the second when Braxton McCauley chopped an infield hit, stole second, went to third on a wild pitch and scored on a passed ball. Sullivan scored its second run in the fourth when Delainey Shorter dropped a bunt down the third-base line, Kendal Edmondson dropped a fly ball into short right for a single, and Jocey Wible grounded out to score the run.

After the first-pitch mistake, BNL’s Aliza Jewell (7-0) settled into a quality outing, working four innings and fanning five. Waggoner finished for the save and struck out six.

“Aliza pitched really well,” Gilbert said. “She settled down and threw well. She did a great job.

“That’s what we need. We have to play games like that. It was a great game, obviously great for us because we won, but they were ready to go. We were a little uneasy. It showed we need to work on communication, work on bunting. I love the way the team is playing. This team is scrappy, gritty, they grind it.”

Sullivan, last year’s 2A state runner-up, managed only four hits. Shorter made four sensational plays at third base, including two diving catches on bunts that got airborne and a leap over the fence to snag a foul ball, to keep the Stars at bay.

“BNL can play all parts of the game – pitch, catch, bat, field” Sullivan coach Lela Earley said. “They’re solid. It’s OK to get beat by a team like that if you play well. I was impressed with the way they performed.”

BNL will compete in the Edgewood Invitational on Saturday, facing Edgewood in the opener before clashing with Roncalli (ranked the best team in the country by MaxPreps and featuring one of the nation’s best hurlers in flame-throwing Keegan Rothrock) in the second game.