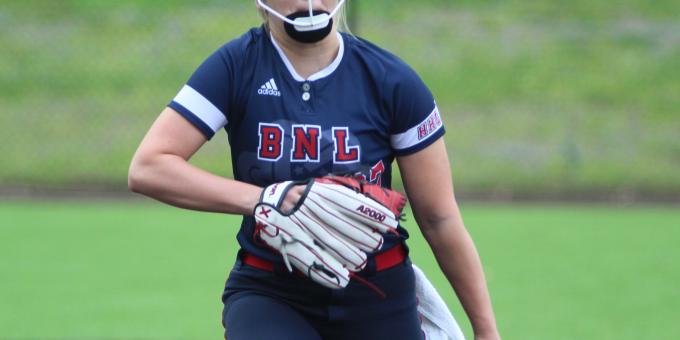 BLOOMINGTON – After spotting Bloomington North a four-run lead, Class 4A No.4 Bedford North Lawrence exploded for a 15-6 victory during high school softball action on Friday evening.

The Stars (18-2) erupted for seven runs in the fifth to snap a 6-6 deadlock. BNL, known for its long-ball attack on offense, was held inside the diamond, but the Stars pounded out 15 hits against two North hurlers to wear down and pound down the Cougars.

North scored five times in the second inning, all with two outs, and added another run in the third for a 6-2 lead. That’s when the Stars went to work.

“I just felt like we would keep hitting, that we would settle down and be OK,” BNL coach Brad Gilbert said. “We would keep battling and eventually bust through.”

The Stars opened with two in the first as Braxton McCauley drew a bases-loaded walk and Carlee Kern lofted a sacrifice fly. The Cougars clawed back against BNL starter Aliza Jewell, with Natalie Burns doing most of the damage with a three-run double. North added another run in the third (on Paris Stuffle’s two-out RBI single) before the Stars broke loose.

BNL pulled even in the fourth, scoring four times with two outs. Lauryn Anderson stroked a RBI single, Ava Ratliff ripped a run-scoring single, and McCauley clobbered a two-run double. In the fifth, the Stars loaded the bases and scored as Anderson was hit by a pitch, Annie Waggoner walked, Ratliff drove in a run with a ground out, McCauley singled in another run, and Jewell jacked a double.

The Stars added two in the sixth on a Ratliff single and McCauley sacrifice fly.

McCauley finished with two hits and 5 RBIs, Ratliff drove in three with her two hits. Waggoner, Jewell, Kern and McKaylin Turner all had two hits each.

“We hit a lot of line drives,” Gilbert said. “We hit it hard and put it in play. We had a lot of base hits. Other nights it’s been a home run or two, maybe some doubles, but we had a lot of timely hits, a lot of two-out hits. That’s exciting to see, that we’re adjusting to whatever pitcher is thrown at us.”

Ella Piercy had three hits for the Cougars.

BNL will visit Corydon on Saturday.