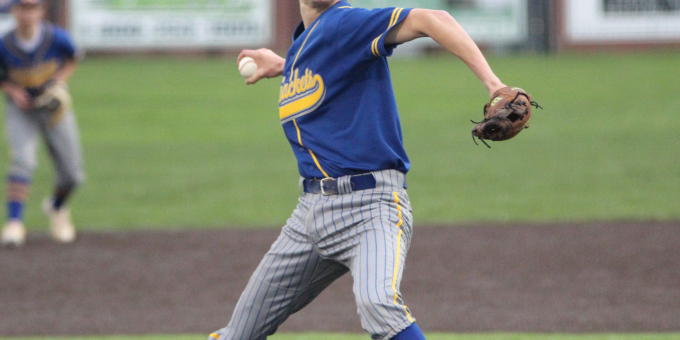 BEDFORD – The last time Mitchell claimed bragging rights in the county baseball rivalry, Jerry Chaney was working in the Bedford North Lawrence dugout. Now he knows how the other side feels. And it’s pretty sweet.

With superb pitching, with a game-changing three-run blast from senior Andrew Shepherd, with late runs that created a necessary safety net, the Bluejackets bounced BNL 8-4 on Friday evening. Shepherd also earned the win on the mound, with relief help from Ben Seitzinger, as Mitchell posted its first win in the series since 2011.

After the Stars (10-10) grabbed early one-run leads, Shepherd’s blast to right field switched momentum, and Mitchell (13-5) added critical insurance runs in the seventh, a cushion that proved crucial when the Stars created a late rally and some nervous angst. But the Mitchell victory was no accident. The Jackets were more sound fundamentally with more hits, fewer errors and fewer walks. That’s winning baseball.

“They beat us in every phase of the game,” BNL coach Jeff Callahan said. “They pitched better, fielded better, hit better up and down the lineup. They did more to win the game than we did. We’ve been playing pretty well, but it was a recipe for disaster with the free bases, some walks, some errors.”

BNL scored first in the first and threatened a huge outburst. Grant Dalton walked, Cal Gates cracked a double, and Jonny Stone grounded out to drive in the run. Kylar Fisher dumped a single into right and Kaedyn Bennett walked to load the bases, but Shepherd escaped without more damage, with a strikeout and pop out ending the threat.

Mitchell scored in the second, thanks to the first BNL error, but the Stars answered that with Dalton’s triple to deep right-center and Gates’ RBI single. Then came the Shepherd bomb, following a Seitzinger walk and Dawson Glassco double, against BNL reliever Walker Ward in the third.

“Believe it or not, he always says he’s a pitcher, not a hitter,” Chaney said. “So that was pretty good for a pitcher. He’s not afraid of anybody, he won’t be intimidated.”

“When he first hit it, I thought it would be a sacrifice fly,” Callahan said. “Then I thought ‘It’s over his head.’ Then it was over the fence.”

From that point, the Jackets were in charge. They added a run in the sixth on a Simon Gaines single, then plated three more in the seventh. Glassco gashed a two-run single, then Dayson Martin and Glassco executed a perfect first-and-third rundown that became a double steal when Martin raced home while the Stars failed to catch Glassco between first and second.

The Stars scored twice in the seventh, with back-to-back doubles by Fisher and Bennett, plus a Mitchell error, but a terrific sliding catch by Martin in center saved at least one run, and Seitzinger got Dalton on a groundout to end the comeback and BNL’s run of success.

“We were here to win,” Chaney said. “We feel like we’ve got a pretty good team, too. They were just focused. A lot of people talk about this game, but it’s not one of the things on our list. Our list is the PLAC championship. Beating BNL is not our No.1 goal, it’s getting better every day.”

Shepherd and Glassco both had three hits. Shepherd struck out 6 in four innings on the mound. Gates and Fisher had two hits each for the Stars.

“Hats off to Mitchell. They pitched well,” Callahan said. “If you play well and the other team beats you, tip your cap. We want to play our best baseball, and we didn’t do that tonight. We just got beat. We have to refocus.”

BNL will return to action on Monday, visiting Seymour in the first round of the Hoosier Hills Conference tournament.