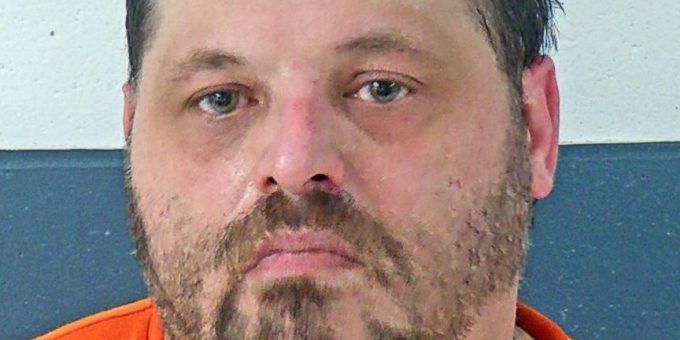 WILLIAMS – On Monday, a Williams man was arrested after Lawrence County Sheriff’s Department deputies responded to a domestic dispute at 135 Sandstone Road in Williams.

The caller reported that 41-year-old Travis Goen was on drugs and pushing people around.

While en route officers were alerted Goen had firearms in the home.

Prior to ending the call with the dispatcher, the female caller said she was leaving the home.

When officers arrived they knocked on the door and Goen answered. He refused to come outside and retreated back into the home.

The officer followed Goen into the home. The officer noted, “Travis was extremely agitated, sweating profusely, and did not want law enforcement at his residence. I followed Travis to his living room where I noticed another female holding two small children.”

The female then attempted to leave the room with the two children and Goen made an aggressive move to stop her. That is when the officer took Goen to the ground and he was detained.

In the home, the officer noticed the distinct odor of marijuana.

Goen admitted to smoking marijuana and doing meth earlier in the day. The female told police there was marijuana in the living room.  She said Goen had shoved her during an altercation but she did not want to file charges.

Goen was transported to IU Health Hospital for a medical evaluation and then detained on a charge of resisting arrest.