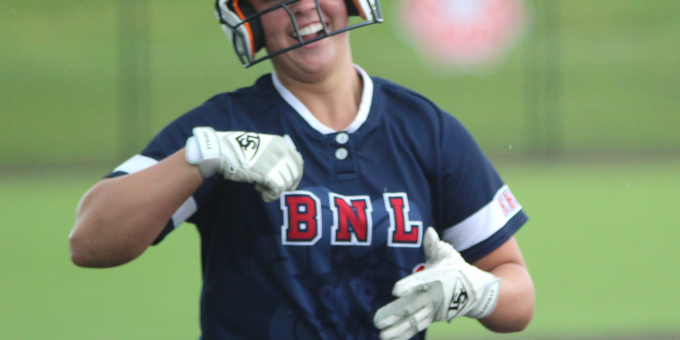 BEDFORD – When thunderous explosions echo across the landscape, shaking windows and rattling nerves, without an obvious explanation, the blame is placed on blasting rock. This is, after all, quarry territory and the “let’s build another highway” capital of the country.

If loud noises were heard on Tuesday afternoon, the culprit was not dynamite, nor thunder with the quick rain squall that forced a 15-minute delay. That was just Bedford North Lawrence, blasting another softball to dust.

The Stars rocked Barr-Reeve with three loud home runs, all the offense during a 4-0 victory. Annie Waggoner, Aliza Jewell and Ava Ratliff set off the bombs, powering Class 4A No.4 BNL (16-2) past Class A No.13 Barr-Reeve. That power display was backed by the combined shutout of Jewell and Waggoner in the circle.

When a composite bat connects with that yellow ball, the noise is unmistakable. Not a crack, more like the hammering of a jackhammer on cement. Bang, bang, bang, the Vikings (10-4) finally crumbled.

Waggoner was the first to strike. Her first-pitch connection for a solo shot to right started the bombardment of Barr-Reeve starter Grace Butcher (4-2). Next was Jewell with her lead-off homer to center in the fourth. Finally, Ratliff smoked a two-run shot to right-center in the fifth, adding to her state-best total with her 16th of the season as she climbed within one of Sarah Stone’s single-season team record.

The homers accounted for all the runs and almost half of BNL’s hit total of seven. On any other night, that would have kept a team within range of an upset. But the Vikings could not dent Jewell (5-0), who went five innings and allowed only four hits before Waggoner worked the final two in relief.

“Aliza pitched really well,” BNL coach Brad Gilbert said. “She kept them off balance, was moving the ball around.”

Jewell struck out six and, more importantly, didn’t walk any. “My ball was moving pretty good,” she said. “My back-door curve was working.” And she avoided trouble until her own homer gave her some working space. “I hit that ball pretty solid,” she said with a smile. “That helped a lot.”

Jewell was the lone Star with two hits. Barr-Reeve’s Karlye Graber had two as well. Butcher struck out five, and got some great defensive work behind her when Willow Thompson made a diving catch in center to save two runs in the fourth.

“It was a good win against a quality team,” Gilbert said. “We didn’t get as many hits as I would like, but we hit some some balls hard right at them. They made the plays. You can’t be upset about that. A couple of times, with runners on, we didn’t get the key hit. But that’s part of it. I thought we hit the ball on the nose.”

“We know Bedford isn’t a team to joke around with,” Barr-Reeve coach Josh Huff said. “They’re really solid. For us to come out and hold them to four runs, we’re pretty excited about that.”

BNL will continue the chase for the Hoosier Hills Conference title on Thursday, hosting Jennings County.