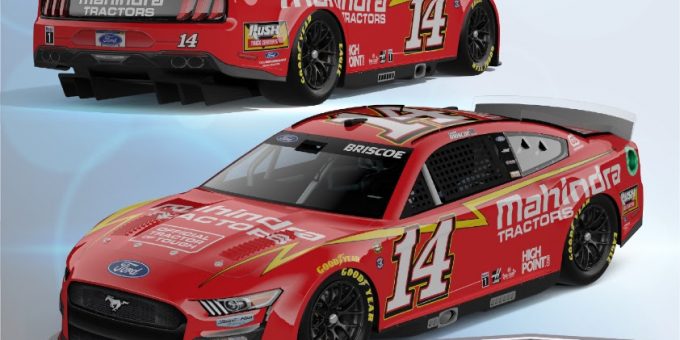 DARLINGTON, SC – Chase Briscoe, driver of the No. 14 Mahindra Tractors Ford Mustang for Stewart-Haas Racing (SHR), is set to honor his childhood hero and SHR co-owner Tony Stewart at Darlington (S.C.) Raceway during the Official Throwback Weekend of NASCAR at the Goodyear 400 Sunday. The race begins at 3:30 p.m.

The now-familiar look of the Official Tractor of Tough will be replaced with a red-and-yellow design that mirrors Stewart’s 2001 Indianapolis 500 entry that kicked off what’s safe to call the most grueling day of his career and the achievement of a lifetime – the 2001 Indianapolis 500 / Coca-Cola 600 double.

Your car pays tribute to your boss Tony Stewart and you’re now in a position where you’ve run the Coca-Cola 600, one leg of that feat. Knowing how physically demanding that race is, are you able to put into perspective just how tough of a driver you have to be to compete in both races and complete every lap of each on the same day?

“Yeah, I couldn’t imagine just the physical side and also the mental side of running both races. Indy cars are, from what I’ve been told, physically demanding,” Briscoe said. “On the mental side of that, I can’t imagine what you go through. A 600-mile race is definitely a long one. Mentally, it’s tough to kind of stay in the game for 600 miles, and physically it’s hot and wears you down. To run 1,100 miles in one day is tough, and then you add in all the stress that comes with the Indy 500 and the stress of traveling to make it back to the (Coca-Cola) 600. I couldn’t imagine doing both, and there aren’t many who have done both, but to do it at the caliber and the level Tony did it was impressive.”

So what does it mean to have this scheme for the throwback race?

“It’s super special to have this paint scheme on the car since I grew up a diehard Tony fan,” Briscoe added. “But there are many reasons I love it, like the connection to Indianapolis. Growing up in Mitchell, Indiana, an hour and 10 minutes south of Indianapolis, the month of May was always special to me because of the Indianapolis 500. Every year, I watched the Indianapolis 500 and then I’d watch the 600. Even last year, I stayed home until the very last minute to watch the finish of the Indy 500 before I headed over to Charlotte to race those 600 miles myself. Then, to think about how tough Tony had to be to get it done, and how we have the Official Tractor of Tough on Tony’s car, the No. 14, it just all comes full circle. To run both of those races, you have to be incredibly tough and it’s pretty cool to take that to another track where you’ve got to be tough to get the job done.”

On May 27, 2001, Stewart started seventh, led 13 laps and finished sixth in the Indy 500 before flying to Charlotte (N.C.) Motor Speedway for that night’s 600-mile Cup Series race, where he started 12th and finished third. Stewart became the first driver to complete all 1,100 combined laps of the Indy 500 and Coca-Cola 600 on the same day.

Briscoe, with just 47 Cup Series starts under his belt, has already demonstrated just how tough he can be on track, but one of the more iconic moments of his career took place at Darlington in the NASCAR Xfinity Series. On May 21, 2020, in a Thursday-night Xfinity Series race at The Track Too Tough To Tame, Briscoe captured the attention of the sports world as he bested Kyle Busch in the first NASCAR event after a 10-week hiatus due to the onset of the COVID-19 pandemic. The NASCAR season was set to resume with the Xfinity Series race at Darlington on Tuesday, May 19, but a full day of rain forced the event to be postponed to Thursday. During the delay on Tuesday, Briscoe learned that his wife had suffered a miscarriage, and when the driver from Mitchell, Indiana, returned to the track with a heavy heart on Thursday, he was overwhelmed by the support of the industry and fans. He started 11th for the 200-lap race around the 1.366-mile oval and ran among the top-10 through the first 90 laps. A quick pit stop on lap 91 for four tires and fuel allowed Briscoe to restart in second place on lap 96. He promptly took the lead, and another lightning-fast stop on lap 134 put Briscoe in the lead for a lap-138 restart. This set up a battle between Briscoe and Busch, the winningest driver in Xfinity Series history with 96 career victories. Briscoe would not be denied, crossing the finish line first in a fender-scraping, tire-rubbing duel where the margin of victory was just .086 of a second. The win’s significance was amplified when Briscoe climbed from the car and dropped to his knees in prayer before giving a tear-filled interview.

This weekend, Briscoe and his wife Marissa return to a place that will always be a reminder of heartbreak and perseverance, but this time joined by their seven-month-old son Brooks. In honor of Mother’s Day, the No. 14 Ford Mustang will also carry pink wings to honor their daughter who rode to victory with Briscoe nearly two years ago.

Darlington is a special place for you, and you not only get to honor your hero, but also honor your mom and your wife on Mother’s Day. That has to add more significance to this weekend and what it represents.

“It definitely does. Darlington is one of those tracks that everyone wants to win at and I’m thankful that I’ve had that opportunity,” Briscoe added. “That (May 2020 NASCAR Xfinity Series race) was a tough race to win with everything we had gone through during the break with the pandemic and the news we got during the rain delay that first day back. Coming back to the track a few days later with a heavy heart and being able to get the win over one of the all-time best NASCAR drivers is something I’ll never forget. I guess that win can be added to the reasons why this paint scheme makes sense and the ‘tough’ theme for this weekend. Kyle (Busch) is tough to race against and even tougher to beat, and Darlington is a tough track to do it on. But, overall, I’m glad this race falls on Mother’s Day. I’m excited to have my family there and to get to spend Mother’s Day at a place that means so much with both my mom and Marissa. Obviously, having Brooks there with us will add that much more to how special this weekend will be and I can’t wait to try to take them all to victory lane.”

Briscoe has two Cup Series starts at Darlington with a best finish of 11th in the May 2021 race. In addition to his May 2020 victory, he also has finishes of sixth and 11th in Xfinity Series competition at the track also known as The Lady in Black.

● Mahindra Tractors, a brand of Houston-based Mahindra Ag North America and part of Mahindra Group’s Automotive and Farm Sector, is the No. 1-selling farm tractor company in the world, based on volumes across all company brands. Mahindra farm equipment is engineered to be easy to operate by first-time tractor or side-by-side owners, and heavy duty to tackle the tough jobs of rural living, farming and ranching. Steel-framed Mahindra tractors and side-by-sides are ideal for customers who demand performance, reliability and comfort at a great value. Mahindra dealers are independent, family-owned businesses located throughout the U.S. and Canada.